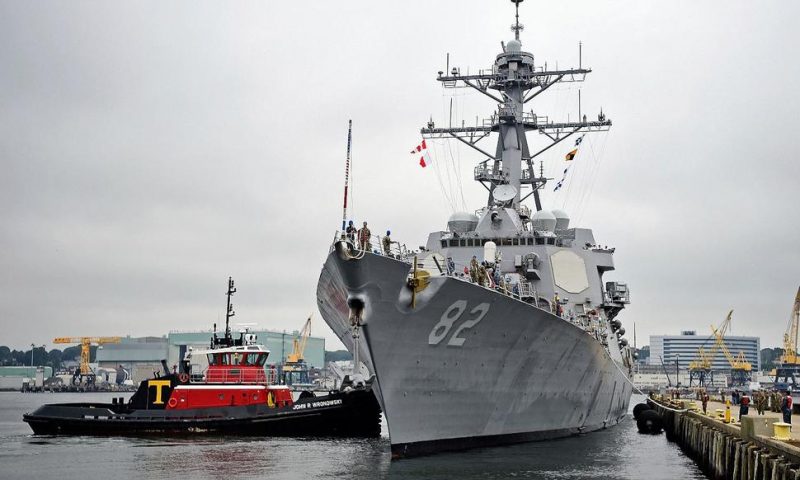 The Navy is proposing construction cutbacks of destroyers and accelerated retirements of cruisers that would delay, or sink, the Navy’s goal of larger fleet.

PORTLAND, Maine — The Navy is proposing construction cutbacks and accelerated ship retirements that would delay, or sink, the Navy’s goal of a larger fleet — and potentially hurt shipyards, according to an initial proposal.

The proposal would shrink the size of the fleet from today’s level of 293 ships to 287 ships, a far cry from the official goal of 355 ships established in the 2018 National Defense Authorization Act.

According to a defense official familiar with the memo, budget negotiations are ongoing and no final decisions have been made. But the Navy is looking at a number of ways to cut costs to fund other priorities, the official said.

One of the proposed cuts would reduce the number of Arleigh Burke-class destroyers planned for construction from 12 to seven over the next five years, trimming $9.4 billion, or about 8%, from the shipbuilding budget, the official said.

Another potential cut would decommission Ticonderoga-class cruisers more quickly over the next five years, leaving nine in the fleet, rather than 13.

The official spoke on condition of anonymity to discuss preliminary budget planning discussions that have not been made public.

“Either option runs counter to the Navy’s stated requirement for a 355-ship fleet, and would not be well received on Capitol Hill given there’s still consensus that the military and strategic threat from Russia and China is only increasing,” said naval analyst Jay Korman of Avascent Group.

Defense analyst Norman Friedman said the proposal would represent a major reduction in anti-aircraft capability that is provided by destroyers and cruisers at a time when the Navy is facing more sophisticated threats from aircraft and missiles.

“If you were serious about facing down the Chinese, you’d probably want more of that than less,” said Friedman.

Republican Sen. Susan Collins and independent Sen. Angus King, of Maine, called the proposal “an abrupt reversal of the Navy’s plan to increase the size of the fleet.”

The senators noted that Congress will have the final say, and they suggested that much of the funding is already in the works. Just this past week, Congress appropriated $5.1 billion for three destroyers, and a $390 million increase in advanced procurement for a down payment on an additional ship next fiscal year, they said.

The Navy reportedly has some wiggle room in reaching the 355-ship fleet size with the suggestion that the battle force could include unmanned, as well as manned, warships.

The Navy said the discussions are “pre-decisional” and subject to change. “We will not comment on future shipbuilding decisions until the budget request is submitted to Congress next year,” said Cmdr. Clay Doss, a Navy spokesman.