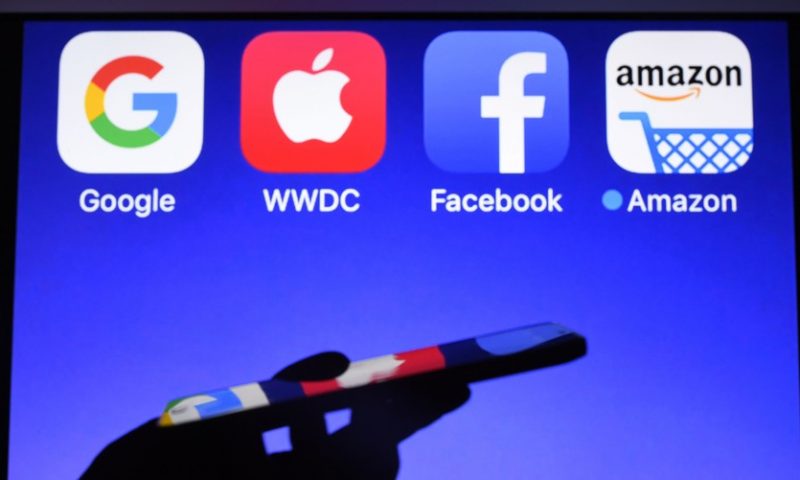 The selloff in tech names comes as the yield on a key bond benchmark fell to a 20-month low, deepening a yield-curve inversion that has accurately predicted economic recessions in the past.

That news was followed by a Reuters report that the Justice Department now has sole jurisdiction for a possible antitrust probe of iPhone maker Apple Inc.AAPL, -1.01%  and that the probe would be part of a broader look into large tech companies.

The benchmark 10-year Treasury yield TMUBMUSD10Y, +0.83% deepened its inversion against the 3-month Treasury bill TMUBMUSD03M, +0.03% as worries about U.S.’s trade frictions with China and Mexico intensify, rippling throughout global markets.

The yield curve, which measures the difference between the yield on the longer duration Treasury and its shorter duration counterparts, tend to slope upward because investors usually demand higher yields for extending loans over a longer period. An inversion of the yield curve, particularly of the 10-year/3-month pair, has preceded the past seven recessions, while throwing out two false positives with an inversion in late 1966 and a very flat curve in late 1998, according to the Federal Reserve Bank of Cleveland.

There were some signs of moderation of trade tensions with officials from China and Mexico indicating that they are open to talks with the U.S. as tensions ramp up.

Chinese Vice Commerce Secretary Wang Shouwen said on Sunday that “we’re willing to adopt a cooperative approach to find a solution,” according to The Wall Street Journal. At the same time, Beijing issued a white paper that reiterated the demands that additional tariffs on Chinese goods be lifted before new trade talks can begin, while placing the blame on the U.S. for the recent breakdown of negotiations.

Tariff worries reached a fresh degree of consternation for fixed-income and stock-market investors after Trump said on Twitter that the U.S. would impose higher tariffs on Mexico beginning June 10 if the country doesn’t stem the flow of migrants across the border.

The Institute for Supply Management’s manufacturing PMI came in at 52.1% in May versus a 52.8% reading in April and lower than the 52.6% expected by economists surveyed by MarketWatch.

Markit also released its purchasing manager’s index for the month of May, reporting a 50.5 level versus expectations of 50.6, according to FactSet.

“Tariffs have two primary impacts all other things being equal: decrease GDP and increase inflation. While it is impossible to know whether all the contemplated tariffs against China and Mexico will be implemented, the total ‘worst-case’ package could knock as much as 1 percentage point off U.S. GDP,” said Bill Stone, chief investment officer at Avalon Advisors LLC, in a note.

Shares of Johnson Controls International PLC JCI, +1.25% rose 1.3% after the electronics and HVAC company announced the preliminary results of an auction where the company sold roughly one hundred million shares at $39.25.

El Paso Electric Co. EE, +13.54% shares surged 14% after the company said it would be acquired by JPMorgan’s Infrastructure Investments Fund, in a deal worth $4.3 billion.

Shares of Cypress Semiconductor Corp. CY, +23.85% rallied 24% after Infineon Technologies AG IFX, -8.05% announced that it would acquire the firm in a $10.1 billion deal.

In commodities markets, the price of oil CLN19, -0.49% reversed direction to fall while gold GCN19, +0.17% settled at its highest since late February and the U.S. dollar DXY, +0.02% weakened against its peers.

They ditched America to retire by a lake in Chile on about $3,000 a month — and rarely come back

Feds target four of the biggest tech companies in U.S., and their stocks are getting slammed