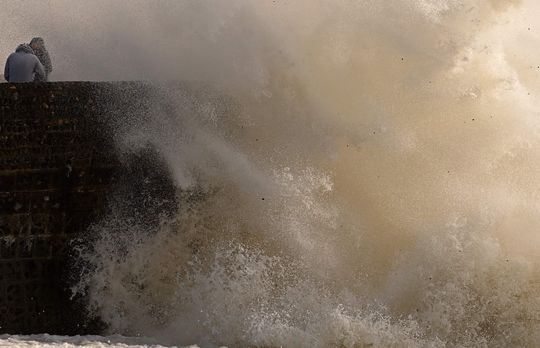 Economic woes in Old Blighty are adding to the markets’ growing list of anxieties, driving more investors into the dollar and out of perceived riskier assets such as U.S. stocks and oil.

Wall Street has plenty of worries of its own, with many looking for the S&P 500 SPX to revisit June lows sooner or later. And big institutional investors seem unwilling to take any chances, reportedly spending $34.3 billion in the latest four weeks on stock options to protect against a selloff, the biggest on record going back to 2009.

Morgan Stanley strategist Vishwanath Tirupattur summed up how tough it is these days in a note to clients on Sunday. “Navigating these choppy waters for the economy and the markets is a challenge in both risk-free and risky assets due to the duration risk in the former and growth/earnings in the latter,” said the strategist.

But also offered up an idea for backs-against-the-wall investor, earning a spot in our call of the day. “Against this backdrop, we think that U.S. investment grade (IG) corporate credit bonds, particularly at the front end of the curve (the 1 to 5 year segment), provide a safer alternative with lower downside for investors looking for income, especially on the back of much higher yields.”

Tirupattur offers up a few stats to back up his call, the first that this is a sizable market, standing at $3 trillion in face value and $2.87 trillion in market value, based on the ICE-BAML index.

“At current prices, on average the yield is around 5% with a duration of 2.64 [years] and A3/Baa1 credit quality. These levels incorporate the steep hikes
ahead that the Fed has signaled at this week’s meeting.”

“Of course, further hikes beyond market expectations are possible. However, the relatively low duration of these bonds makes them less sensitive to incrementally higher rates, and with yields at 5%, they offer fairly attractive carry. It’s also worth noting that with just 13% of the ICE-BAML Index due to mature between now and the end of 2024, the wall of maturities for these bonds is not particularly imposing,” said the strategist.

“This means that the vast majority of the issuers of these bonds don’t have to come to the new issue market to borrow at the current higher rates,” he said. 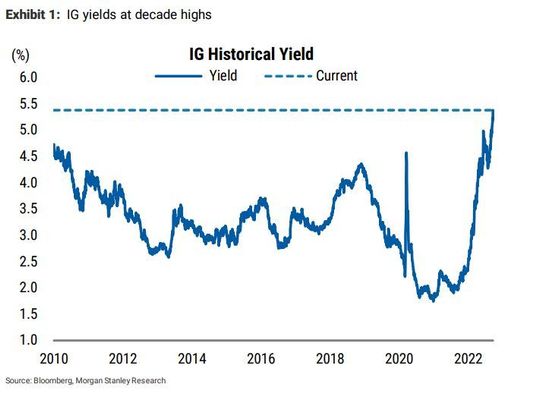 As for those worried about credit fundamentals deteriorating if the economy slows or enters a recession and company earnings turn south, Tirupattur says the starting point for IG is important.

After inching up last quarter, median IG gross leverage got a bit better in 2022, moving down to 2.33 times from 2.37 times in the first quarter, well off a COVID-19 peak of 2.9 times in the second quarter of 2020, said the strategist, citing the bank’s credit strategists, Vishwas Patkar and Sri Sankaran.

And despite sharply higher rates, interest coverage remains a bright spot for the sector, with median coverage trending to 12.6 times from 12.5 times in the first quarter, around the highest levels since the early 1990s.

What this means is even if yields on new debt are higher than the average of all debt outstanding, maturing bonds have relatively high coupons. So most companies have had to refinance at much higher levels.

Then there’s history. “Looking back to the stagflationary periods of the 1970s and 1980s, while we saw multiple recessions and volatility in equity markets, IG credit (albeit before the high yield market as we know it came into being) was relatively stable, with only fairly modest defaults,” said Tirupattur.

“Finally, it’s worth highlighting that we are talking about front-end IG bonds and not high-yield bonds, which are more vulnerable to defaults in a growth slowdown,” he said. 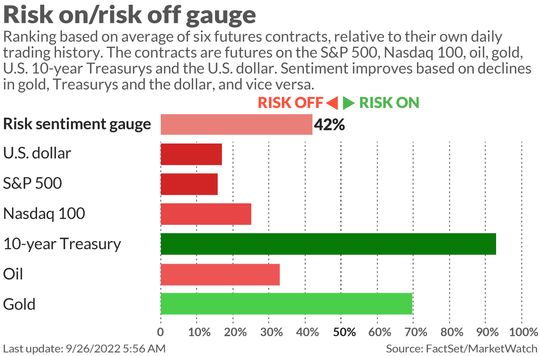 Stock futures ES00 YM00 NQ00 are weaker as bond yields BX:TMUBMUSD02Y BX:TMUBMUSD10Y keep marching higher. Gilt yields BX:TMBMKGB-02Y are also surging as the pound GBPUSD crawls off a record low of $1.034 and the euro EURUSD went as low as $0.955. Oil prices CL 1 are falling and gold GC00 is down on the dollar’s DXY charge higher. Bitcoin BTCUSD is in the green at just over $19,000.

On the heels of a third mega rate hike, Atlanta Fed President Raphael Bostic said the Federal Reserve will do all it can to “avoid deep deep pain” for the economy. Bostic will also speak Monday, along with Boston Fed President Susan Collins, Dallas’s Lorie Logan and Cleveland’s Loretta Mester.

A far-right party with neo-fascist roots is set to win Italy’s national elections, though some have been reassured by leader Giorgia Meloni’s more moderate tone.

PG&E PCG will replace Citrix Systems CTXS in the S&P 500 as of Oct. 3, and EQT EQT will replace Duke Realty DRE.

Apple AAPL plans to make its latest iPhone 14 in India.