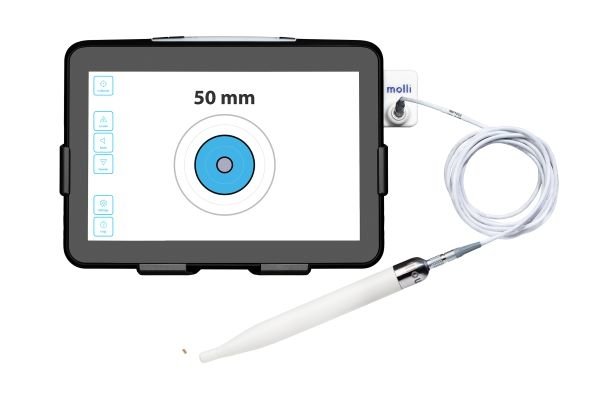 As if undergoing breast cancer surgery isn’t already stressful enough, traditional methods often add an extra hurdle in the form of a pre-operation procedure during which a wire or radioactive seed is inserted into the tissue to mark the location of a tumor.

Minimizing that hassle—for both patients and physicians—is the primary goal of Molli Surgical’s wire- and radiation-free system for tumor localization. That goal is seemingly shared by the FDA, which granted 510(k) clearance to Molli’s system for use by radiologists and surgeons.

The technology uses a 3.2-millimeter solid magnet in place of the usual wire or radioactive marker, eliminating any risks and expenses associated with radiation exposure and offering a more accurate localization technique than both radiation- and wire-based methods. Relying on magnets also allows the marker to be implanted and stay viable from anywhere between the day of the surgery to up to a month before.

Additionally, Molli’s marker does not interfere with any other MRI or ultrasound technology used in the operating room.

Once the magnetic seed is implanted in the target tissue with Molli’s needle-tip inserter, the company’s detection wand is used to locate the marker and guide surgeons through the lesion removal.

That process is helped along by a tablet that is connected to the wand and powered by a rechargeable battery, which displays the distance between the wand and the marker in millimeters. The tablet also offers a visualization of the wand’s approach and produces a sound that changes in pitch as the wand gets closer to the marker.

Though the Molli system has currently been tested and cleared only for use in lumpectomy breast cancer surgeries, the Toronto-based company has said its tumor localization technology could easily expand into other applications.

“This year alone, more than 2 million women around the globe will receive the devastating news that they have breast cancer. Our mission is to make their journey smoother and support them along the way,” CEO Fazila Seker said in a release about the FDA clearance.

“Our new Molli technology will make breast cancer surgery easier and more precise as it helps healthcare providers locate and remove even the smallest tumors with unprecedented precision,” Seker said.

Molli isn’t the only medtech company looking to make tumor localization safer, more accurate and less costly. In 2017, Cianna Medical received FDA clearance for its own nonradioactive implant for breast tumors. Cianna’s system relies on radar technology to locate the implant, which has no limitations on how long it can remain in the body before surgery.

Meanwhile, researchers from Purdue University and On Target Laboratories are developing a fluorescent dye that binds itself to cancer cells to make them more easily visible during surgery and ensuring that every piece of a tumor is removed. The intravenous dye is currently being tested in lung and ovarian cancers.