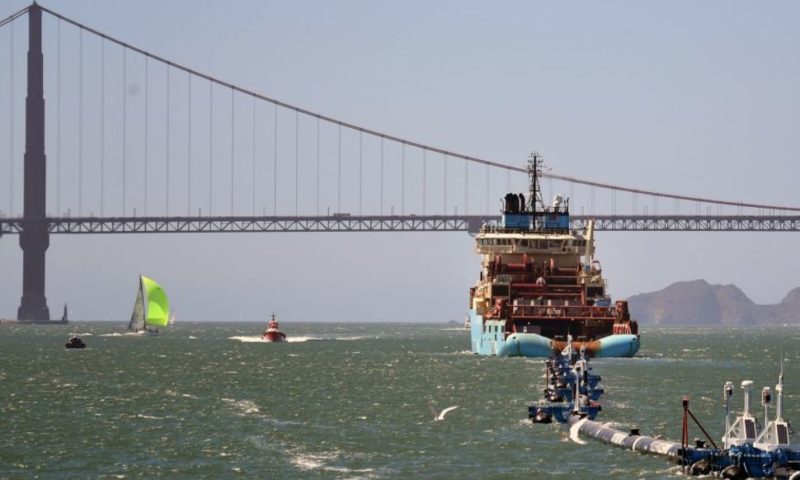 The $20 million device designed to pick up plastic from the Great Pacific Garbage Patch has experienced setbacks in the two months since it was deployed.

A DEVICE DESIGNED TO collect trash from the Great Pacific Garbage Patch is being towed back to port after its second malfunction in less than three months on the job.

A 60-foot section of the device – a 2,000-foot floating horseshoe – detached last week from the rest of the system, forcing Ocean Cleanup System 001 to be brought in for repairs, according to the Dutch nonprofit that built the system.

“We will set sail as soon as an appropriate weather window is available,” Boyan Slat, CEO of The Ocean Cleanup, wrote in a blog post New Year’s Eve.

The system, assembled in San Francisco, was launched in October with great fanfare. Made up of 4-foot sections with a nine-foot skirt that hangs beneath the surface, the system is designed to passively collect the trash, fishing debris, microplastics and other litter that has coalesced into enormous garbage patches in the Earth’s oceans. The Great Pacific Garbage Patch, one of several formed by swirling ocean currents known as “gyres,” is about 1,400 miles from California and spans an area roughly as large as Texas.

The system reportedly cost about $20 million to develop and build. Ocean Cleanup, which says it raises its money through personal and business donations as well as government support, had hoped its device would collect 2,200 pounds of trash per week. Slat said in the blog post that it had collected about 4,400 pounds of plastic in the weeks since it was deployed.

However, Ocean Cleanup discovered in late November that the device wasn’t moving fast enough to keep up with the trash it was trying to collect, causing the system to accumulate far less garbage than the group had hoped. Last week, a routine inspection of the system revealed that a section at one end of the system had broken away.

Slat, in the blog post, described the challenges as “teething troubles,” which he maintained “are solvable.”

“The fact that the cleanup system orients itself in the wind, is able to follow the waves well and is able to catch and concentrate plastic gives us confidence in the technology,” he wrote.