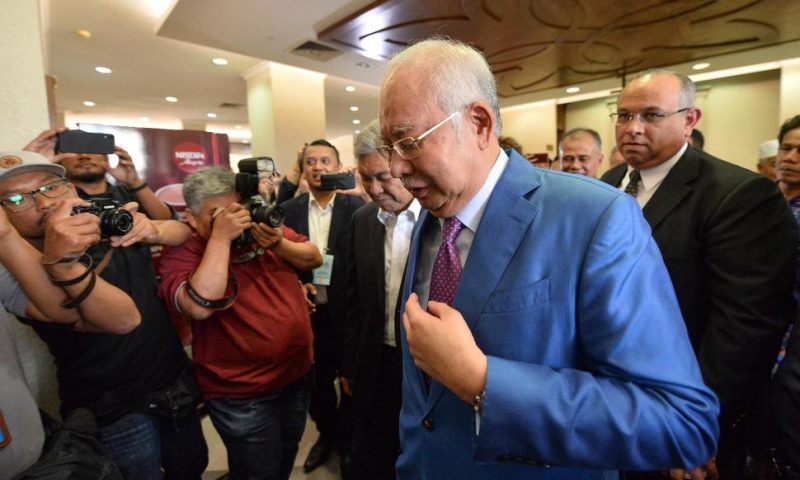 Former Malaysian Prime Minister Najib Razak has started his defense in his first corruption trial linked to the multibillion-dollar looting of the 1MDB state investment fund.

KUALA LUMPUR, MALAYSIA — Former Malaysian Prime Minister Najib Razak sought to show he was the victim of a cunning fugitive financier as he opened his defense Tuesday in his first corruption trial linked to the multibillion-dollar looting of the 1MDB state investment fund.

Najib is defending himself against seven charges of abuse of power, breach of trust and money laundering relating to 42 million ringgit ($10.1 million) that allegedly went into his bank accounts from SRC International, a former unit of the 1MDB fund.

The high court judge last month said it was clear Najib, who was also finance minister at the time, wielded “overarching authority and power” in SRC and had acted for personal gains.

Standing in the witness stand in his crisp blue suit, Najib outlined 1MDB’s formation and the role of financier Low Taek Jho, who has been identified by U.S. investigators as the mastermind behind the massive scandal that is being probed in several countries.

He said 1MDB was originally a sovereign wealth fund started by the northeastern Terengganu state together with the state ruler, who was Malaysia’s king at the time. Ethnic state rulers take turns as Malaysia’s monarch under a rotating system.

Low at the time was an adviser and close associate of the then-king, he said.

The fund ran into problems over its Islamic bond issuance and the Cabinet “reluctantly” agreed to take over in 2009 to prevent embarrassment to the king and adverse impact on the country’s bond market, he said.

Najib, 66, didn’t say what Low’s role was after the takeover. He said Low “has shown himself to be a very influential figure in the Middle East” and could help draw investments for 1MDB.

He said the 1MDB directors remained the same and that it was 1MDB’s idea to form SRC in 2011. He said he wasn’t aware of company clauses giving him key power in SRC but that it wasn’t unusual in government-linked companies.

Najib denies any wrongdoing and accuses Malaysia’s new government of seeking political vengeance. His alliance’s shocking loss in May 2018 elections led to Malaysia’s first change of government since independence from Britain in 1957.

U.S. investigators say more than $4.5 billion stolen from 1MDB was laundered through layers of bank accounts in the U.S. and other countries to finance Hollywood films and buy hotels, a luxury yacht, art works, jewelry and other extravagances. More than $700 million from the fund allegedly landed in Najib’s bank account.

This is the first of five criminal cases against Najib over 1MDB corruption. His wife, several officials from his government, and the U.S. bank Goldman Sachs also face charges related to the scandal.

Najib’s defense will show he is also “a victim” of a scheme devised by Low and his cohorts, Najib’s lawyer Muhammad Shafee Abdullah told reporters during lunch break Tuesday. Low bribed the management of 1MDB and SRC to do his bidding and kept Najib in the dark, the lawyer said.

Low is wanted in both Malaysia and the U.S. and currently in hiding,

Najib has shown he “has nothing to fear” by subjecting himself to cross-examination in the stand, Shafee added.

The patrician former leader, whose father and uncles were the country’s second and third prime ministers respectively, could face years in prison if convicted.