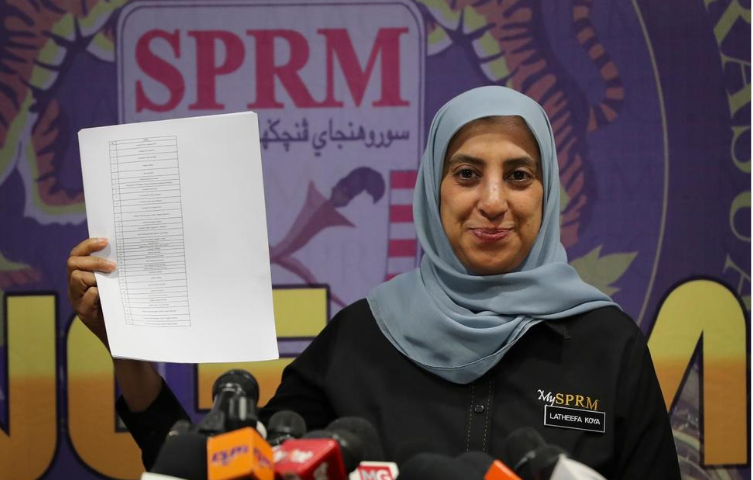 Malaysia’s anti-graft agency has begun legal action to seek the forfeiture and recovery of $65.1 million embezzled from the 1MDB investment fund.

PUTRAJAYA, MALAYSIA — Malaysia’s anti-graft agency said Friday it has begun legal action to seek forfeiture and recovery of 270 million ringgit ($65.1 million) embezzled from the 1MDB investment fund. Officials estimated that another $5 billion worth in assets abroad linked to the fund could be recovered.

Latheefa Koya, the new chief of the Malaysian Anti-Corruption Commission, said the agency has filed complaints in the high court against 41 individuals and entities to recover the money allegedly given to them by ex-Prime Minister Najib Razak.

U.S. investigators say at least $4.5 billion were allegedly stolen and laundered by Najib’s associates from 1MDB. Najib set up the fund when he took power in 2009, but it accumulated billions in debts. The 1MDB fiasco led to Najib’s shocking electoral defeat in May last year and ushered in the country’s first change of power since independence from Britain in 1957.

Najib and his wife have been charged with multiple counts of corruption and money laundering and both have pleaded not guilty.

Latheefa said the civil forfeiture effort, the biggest so far by the agency, won’t be hampered by Najib’s ongoing trial linked to 1MDB. She said it is a “straightforward case” as there was a clear money trail showing the funds being channeled into Najib’s bank account and Najib disbursing them to the 41 respondents.

Najib’s claim of not knowing the source of the money in his account is unacceptable because the bank account holder is responsible to find out where the money came from and to report suspicious transactions, she told a news conference.

Latheefa said Najib’s United Malays National Organization party was the main recipient, with various divisions receiving 212 million ringgit ($51.1 million) in a series of transactions. Others included political parties in his former ruling coalition, charity trusts, several individuals and retail outlets including a jewelry chain, according to a list provided by the agency.

The agency’s deputy commissioner, Azam Baki, said the government will form a taskforce soon to work with other agencies abroad to recover some $5 billion worth of assets bought with 1MDB money. He declined to give further details.

Latheefa said the government has already recovered 919 million ringgit ($221.4 million) following forfeiture of 1MDB assets and funds from 11 entities and companies abroad. The government has also recovered $126 million from the sale of a luxury yacht bought by fugitive Malaysian financier Low Taek Jho using 1MDB funds. Low, identified by U.S. investigators as the mastermind behind the 1MDB looting, remains at large but has been charged both in the U.S. and Malaysia.

The government had in May also filed suits against Najib, his wife Rosmah Mansor, their three children and 13 others to forfeit and recover millions of dollar worth of luxury items, property and vehicles allegedly bought with 1MDB money. This included a huge stash of jewelry such as diamond necklaces, tiaras and designer handbags confiscated from properties linked to Najib after his election defeat, valued by police at more than 1 billion ringgit ($241 million).

“The recovery of the money is as important as going for prosecution,” Latheefa said.