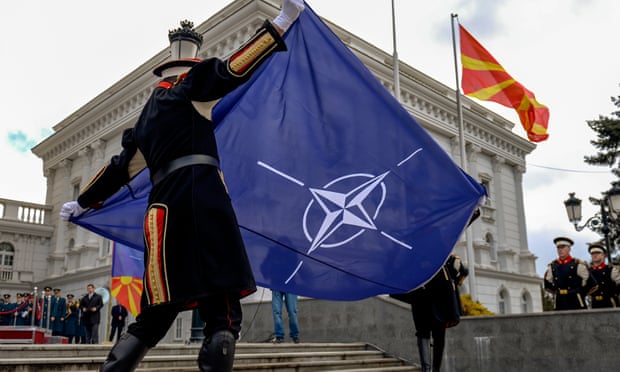 After almost three decades of diplomatic dispute, punctuated by high drama with Greece, a new state called North Macedonia has finally assumed its place on the map of western Balkan nations.

The freshly named country celebrated the event with a flag-raising ceremony marking its prospective – and long-awaited – accession to Nato. Under cloudy skies, the military alliance’s distinctive flag was hoisted outside the main government building in Skopje, the former Yugoslav republic’s capital.

Addressing assembled dignitaries in front of the building where workers were poised to replace a Republic of Macedonia sign removed earlier in the week with the state’s new name, prime minister Zoran Zaev luxuriated in the moment, saying a “historic goal” had been achieved.

As a result of its new name, North Macedonia could finally join Nato – a long-held dream for the small, multi-ethnic country which only narrowly escaped civil war in 2001.

Athens had blocked Skopje’s membership of the alliance arguing its northern neighbour’s use of the name without geographic qualification amounted to theft of its own history, identity and cultural heritage.

The Greek province of Macedonia, abutting the tiny republic, has long been associated with Alexander the Great, the most famous Macedonian of all. Successive Greek governments had insisted the landlocked state’s determination to be known as Macedonia implied territorial ambitions against the Greek region.

Under the landmark pact struck last year between Zaev and his leftwing counterpart in Athens, Alexis Tsipras, Greek MPs became the first Nato member parliament on Friday to pass a protocol agreement paving the way to North Macedonia’s entry into the alliance.

The strategic Balkan state will become Nato’s 30th member once ratified by other signatories – a prospect slammed by Russia which regards the Balkans as a traditional sphere of influence.

In a last move that effectively crossed the rubicon, the Greek government sent a diplomatic note late on Wednesday informing Skopje that, with passage of the historic accord and Nato protocol, it had officially fulfilled its side of the deal.

With the United Nations poised to be informed of the name change, Macedonian authorities will have five years to alter the country’s name both domestically and internationally but, as in Greece where the compromise accord ignited fierce protests, opposition has been intense.

“Everything from official documents to passports will be changed,” said Athens’ deputy foreign minister, George Katrougalos, noting that over 1,000 signs with the republic’s new name had been ordered.

One of the first appellations to be altered will be at the border crossing North Macedonia shares with its neighbour to the south.

“There will be changes on our side, too, but nothing like the challenge faced by them,” the Greek foreign ministry’s spokesman, Alexandros Yennimatas, told the Guardian. “A circular has been sent to [our] public and local administration informing them to adopt the new name.”

Implementation will not be easy. Many Macedonians feel humiliated by the compromise with 60% failing to vote on the issue when put to referendum in September. Opponents have been incited to take to the streets and deface signs bearing the republic’s new moniker by the nationalist VMRO main opposition party.

Within an hour of Skopje receiving the notice from Athens, Nikola Dimitrov, the republic’s foreign affairs minister, tweeted: “May today be the beginning of a long friendship between Greece and North Macedonia. We can’t change our past, but we can and we will shape our future of friendship, partnership and cooperation.”

How India’s single time zone is hurting its people