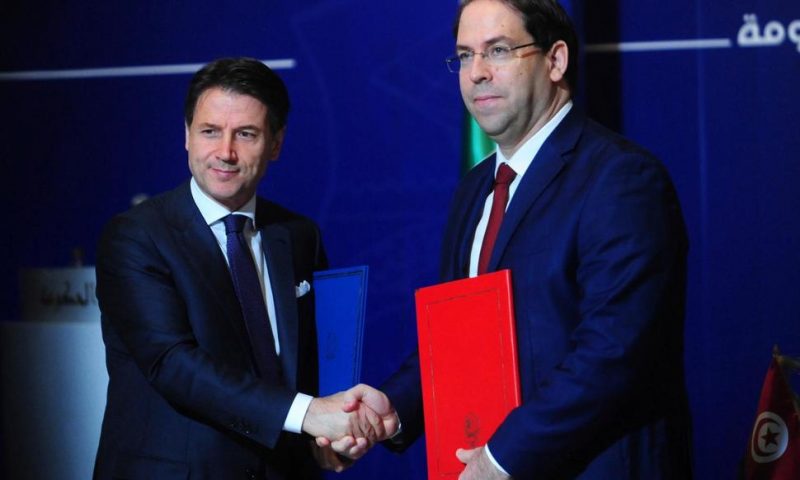 Italy’s top leaders in Tunisia to shore up ties, security amid concerns over Libya.

TUNIS, Tunisia — Tunisia and Italy bolstered their ties with a visit Tuesday by the Italian prime minister, concluding commercial deals and pleading for dialogue, not fighting, to prevail in Libya.

Seven cooperation agreements on energy, education and decentralization were signed during the visit by Italian Premier Giuseppe Conte and an array of top ministers for the first inter-governmental summit between the two nations.

An important delegation of Italian business leaders took part in an economic forum.

After taking office last May, Conte made Tunisia his first stop south of the Mediterranean in November. Accords were reached then on help in controlling the more than 400-kilometer (250-mile) Libyan-Tunisian border and development of Tunisia’s interior.

“Dialogue is the only means to avoid an escalation and guarantee the unity and stability of Libya,” Conte was quoted in a statement by the president’s office as saying.

He expressed firm support for Tunisia’s efforts to fight illegal immigration and extremism, the statement said.

Tunisian Prime Minister Youssef Chahed, speaking with Conte at a joint news conference, said that Italy and Tunisia are the nations “most touched” by the crisis in Libya.

He expressed fear that Tunisia could relive the experience of 2011 when more than 1 million refugees fled Libya for Tunisia in the fighting that ended the rule of Moammar Gadhafi, and said security forces at the Libyan border are in a state of maximum alert.

Field Marshal Khalifa Hifter’s self-styled Libyan National Army launched an operation to retake the Libyan capital of Tripoli on April 4 and has been locked in heavy fighting in and around the city with militias loosely allied with a U.N.-supported government. The clashes have killed more than 270 people.

Conte said Italy talks with all sides and “has good relations with Hifter.” But he rejected the fighting.

Libya slid into chaos after longtime dictator Moammar Gadhafi was overthrown and killed in 2011.

The 2011 Tunisian revolution triggered the Arab Spring that ricocheted to Libya. Now, Tunisia’s budding democracy is plagued with economic and security problems, and youth seeking an exit.

Under Salvini, Italy has essentially closed its ports to migrants fleeing Libya aboard smugglers’ boats. According to interior ministry data, 722 migrants arrived in Italy in 2019 as of Monday, compared with 9,419 during the same period last year and 37,034 in 2017.

Whereas Nigerian, Eritrean and other sub-Saharan Africans often made up the majority of migrants coming to Italy in previous years, Tunisians now take the top spot.

As of Monday, 226 of the migrants arriving this year were Tunisians, according to the interior ministry.