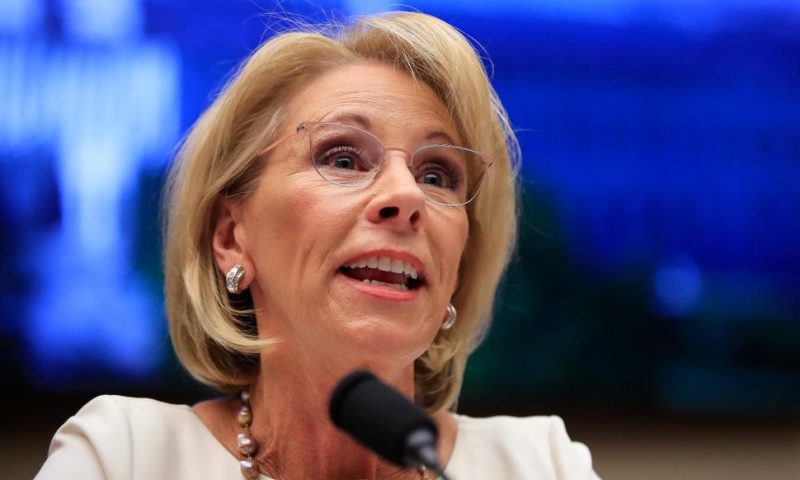 Political battle is reheating over a federal program that was designed to cancel student loans for certain public workers but has largely failed to deliver that promise.

In 2007, the U.S. government made a promise to public service workers: Make 10 years of payments on their federal student loans and any remaining debt would be erased. But officials have largely failed to deliver.

And that’s left lawmakers questioning whether to end the program or try to fix it.

The Trump administration and some Republican legislators see it as a lost cause, arguing that the Public Service Loan Forgiveness program is misguided and has proved too complicated for borrowers to navigate.

But a group of Democrats is pushing to salvage the program, blaming its failure on poor management by the Education Department. The group, which includes six 2020 presidential contenders, proposed a new bill this month that would simplify the rules and expand the offer to a wider swath of borrowers.

“Millions of teachers, social workers, members of the military, nurses, public defenders and countless others have been denied the support they have earned,” said Sen. Kirsten Gillibrand, D-N.Y., one of the bill’s sponsors and a Democratic presidential candidate. “It’s time for Congress to fix this program and create a fairer and simpler process for public servants seeking loan forgiveness.”

Signed into law under President George W. Bush, the program is meant to help college graduates who pursue jobs that often pay modest salaries but serve a greater good, such as careers in teaching, the military or with nonprofit groups. But turmoil has been mounting around the program since last year, when the Education Department revealed that 99% of borrowers who applied for loan discharges had been rejected. As of December, just 338 public workers had been granted loan forgiveness out of nearly 54,000 applicants, according to recently released department data .

Most have been denied because they didn’t meet narrow eligibility requirements. Broadly, the program promises to forgive federal loans for public workers who make 120 monthly payments while working for approved employers. But there are caveats: It applies only to certain types of federal loans, for example, and only for borrowers who opted into certain repayment plans.

Thousands of borrowers have said those details were never made clear to them, and many have reported that they were misled by loan servicing companies hired by the government. A scathing 2018 report from the Government Accountability Office concluded that the Education Department had failed to issue clear information to borrowers or loan servicers.

So far, a relatively small number of borrowers have asked for loan cancellations — the window for applications began in October 2017 — but there’s evidence that many more are on the way. Education Department data show that nearly 1 million borrowers have taken the initial steps to have their loan payments counted for the program.

John DeGennaro, a 64-year-old English professor, recently applied for loan cancellation for the sixth time; his previous requests were rejected over problems with his paperwork.

“I checked off all the right boxes, I made the 120 payments and then I sent it in, and it started this circus,” said DeGennaro, of Encinitas, California. “Every time I sent something, there would be something else that wasn’t my error. It started to become absurd.”

He’s still awaiting a decision on his latest application. Meantime he’s stuck with $14,000 in federal student loans that he says he can’t pay off with his income as an adjunct at two local colleges.

Seeking a temporary fix, Congress last year approved $700 million to erase loans for borrowers who were rejected because they entered into the wrong repayment plan. But Democrats say the Education Department has failed to implement even that stopgap measure.

An April 15 letter from Senate Democrats says the department has continued to send borrowers misleading information about eligibility and has taken an “unnecessarily restrictive approach” to the rules. The letter asks that Education Department officials be ordered in the 2020 budget to notify borrowers who might be eligible for loan relief.

Other Democrats have used congressional hearings to rebuke Education Secretary Betsy DeVos over her handling of the program. At a March budget hearing, Sen. Jeff Merkley, D-Ore., asked DeVos if she’s really interested in helping borrowers or if she’s out to serve “the powerful financial companies profiting off of this malfeasance and incompetence.”

DeVos in turn blames Congress for creating a program with such puzzling rules, but she also opposes the offer on principle. “We don’t think one type of a job, one type of role, should be incentivized over another,” she said at a House hearing this month.

President Donald Trump’s 2020 budget proposal asks Congress to eliminate the program, starting with borrowers who take out new loans after July 1, 2020. It argues that the benefit “is not only complicated for borrowers to navigate, but it also inefficiently targets subsidies only to those borrowers in public service jobs.”

House Republicans similarly tried to end the program in a bill that failed in the last session of Congress. Some cite the cost, which some federal estimates peg at $22 billion over the next decade, although just $21 million in loans have been discharged so far.

A spokesman for Sen. Lamar Alexander, R-Tenn., the top Republican on the Senate education committee, said the program will be discussed as part of the reauthorization of the Higher Education Act, a federal law that governs much of higher education.

Spokesman Taylor Haulsee said Alexander “believes that Congress should maintain but repair and improve the Public Service Loan Forgiveness program so it is easier to understand and operate, and better targeted at occupations taxpayers actually want to subsidize with their generosity.”

The bill proposed by Senate Democrats would expand loan forgiveness to all types of federal student loans and all types of federal repayment options. It would also allow borrowers to get half of their loan balance forgiven after five years, and simplify the application process.

Along with Gillibrand, the 13 senators backing the proposal include Democratic presidential contenders Elizabeth Warren of Massachusetts, Amy Klobuchar of Minnesota, Kamala Harris of California and Cory Booker of New Jersey, along with Bernie Sanders from Vermont, who is independent.

Gold finishes higher to tally a weekly gain of 1%