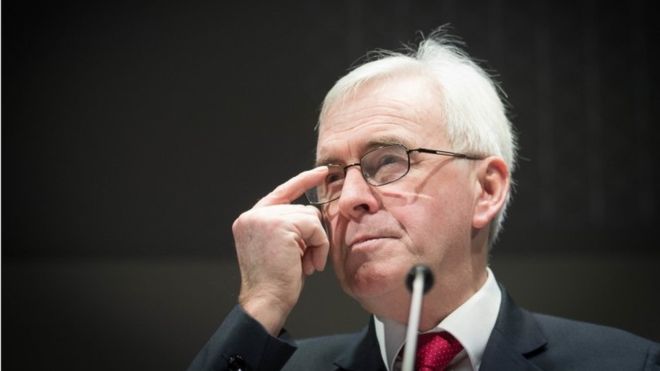 Labour’s proposals also include keeping Royal Bank of Scotland in public ownership, and creating a bank to invest in infrastructure.

Labour has cited research from consumer group Which? which suggested that over the past 30 years the UK has lost nearly two-thirds of its bank and building society branches, from 20,583 in 1988 to just 7,586 today.

Mr McDonnell also said Labour would halt the disposal of the government’s 62% stake in RBS so that profits, and the branch network, served communities.

The bank was rescued by the government in 2008 in the aftermath of the financial crisis at a cost of £45bn.

Last year, RBS announced its first dividend to shareholders since its bailout.

A spokesman for RBS said on Sunday: “The timing and price of any government share sale is a matter for the Treasury. Our focus continues to be on building a bank that delivers for shareholders, customers and the UK economy.”

He said: “Finance is the central nervous system of the economy. It directs investment, deciding which businesses and projects get off the ground and which fail.

“For too long, this vital part of our economy has been solely in the hands of the big banks and the speculators.”

Small firms face a series of new costs from Monday