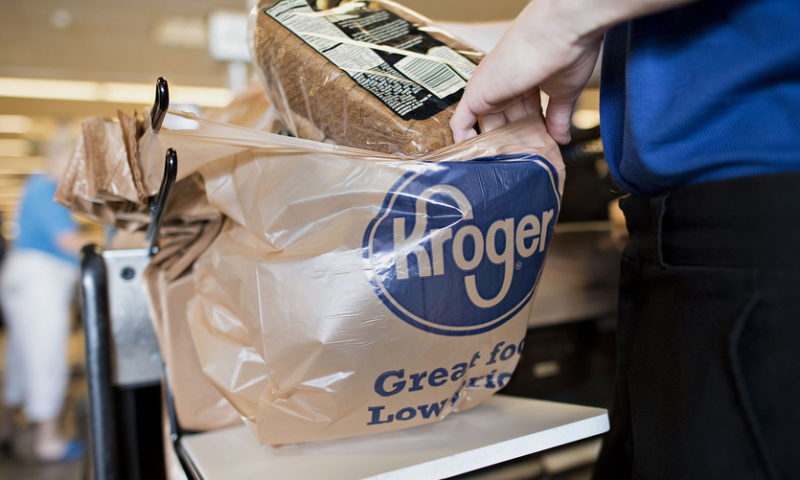 Kroger shares are closed Friday down 2.7% after a nearly 10% drop on Thursday

Kroger Co.’s most recent results indicate that Walmart Inc. and Target Corp. are both taking items out of Kroger’s grocery basket, gaining share as Kroger invests to keep pace.

Kroger KR, -2.73% shares slipped another 2.7% on Friday trading after closing down nearly 10% on Thursday.

The grocer focused on the progress of its Restock Kroger plan in the earnings release, including greater digital capabilities. Digital sales growth for the quarter was 50%.

In August, it announced a partnership with a robotics company, Nuro, to pilot driverless delivery. And in May, it raised its stake in U.K.’s Ocado Group PLC and licensed technology to operate automated warehouses and make online deliveries.

However, these efforts have come up against those of Walmart

WMT, -0.56% and Target TGT, -0.16% , who have each stepped up their digital games in order to provide services like curbside pickup and speedy delivery. According to data from eMarketer, grocery app usage will grow nearly 50% in 2018.
“Kroger’s identical sales deceleration this past quarter was in sharp contrast to the improvements at Walmart and Target and the uptick across the food retail industry, per Nielsen,” wrote J.P. Morgan analysts in a note. “We conclude from this that Kroger is probably struggling with market share.”

Kroger reported 1.6% identical sales growth for the quarter after 1.9% growth in the first quarter.

“We believe the share gains reflect many efforts, most notably incremental price investments, improvements to their assortment including private brand, and technology investments, including online grocery growth (Walmart specifically),” analysts led by Seth Sigman wrote in a note.

Analysts think there is market share “up for grabs” but are curious whether Kroger’s investments will pay off.

“Following a challenging quarter for Kroger, we will be watching to see whether its initiatives take hold in 2H to help narrow the gap, including traction with recent price investments [and] benefits from the remodel work, as Q2 is expected to be the peak of disruption,” the note said.

Credit Suisse rates Target outperform with a $94 price target and Walmart neutral with a $103 price target.

BMO Capital Markets also raises questions about the second half.

“Longer term, we believe investors should consider if digital initiatives, such as Ocado, will offer Kroger a competitive advantage in a rapidly evolving food retail delivery landscape, which seems to be shifting toward one- and two-hour delivery,” analysts led by Kelly Bania wrote.

Analysts wonder whether Ocado is set up to offer the rapid delivery that’s becoming the industry standard.

“While it is possible it may offer same-day in some areas, we expect these automated 300-to 350 square foot sheds to be located in areas that likely make one- and two-hour delivery challenging for the majority of customers,” the note said. “This seems less convenient, in our view, than rapidly expanding offerings from Instacart, Amazon/Whole Foods and others.”

Just this week, Amazon.com Inc. AMZN, -0.99% announced that Prime Now grocery delivery, which can take as little as one hour, has expanded to 10 additional cities.

Homeowners are sitting on a record $6 trillion in equity. Why aren’t they using it?