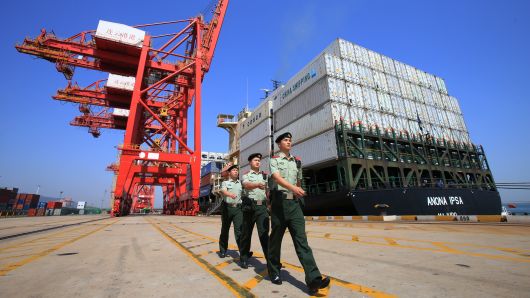 J.P. Morgan is getting less optimistic about the trade conflict between the U.S. and China.

The firm lowered its rating for Chinese equities to neutral from overweight, predicting the escalating trade war between the countries will affect China’s economy next year.

“A full-blown trade war becomes our new base case scenario for 2019,” emerging market strategist Pedro Martins Junior said in a note to clients Wednesday. “There is no clear sign of mitigating confrontation between China and the US in the near term.”

The White House’s latest tariffs of 10 percent on $200 billion of imports from China took effect last week. President Donald Trump, in a Sept. 17 statement, said the tariffs would rise to 25 percent on Jan. 1.

Junior said China’s GDP growth could be negatively impacted by 1 percentage point from the latest round of announced tariffs, assuming it “does not take countermeasures.”

“Higher tariffs are squeezing Chinese manufacturing’s profit margin, reducing the investment incentive and hiring, which would then drag on consumption via reduced income,” he said.

As a result, J.P. Morgan reduced its year-end price target for the MSCI China index to 85 from 95, representing 9 percent upside to Wednesday’s close.

Facebook stock is worth the risk, Mark Mahaney says