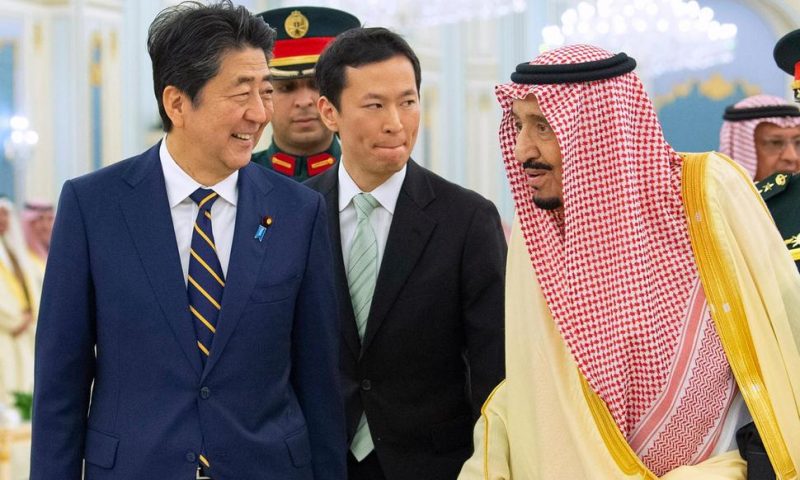 Japanese Prime Minister Shinzo Abe is in Saudi Arabia for talks, amid heightened tensions in the region.

RIYADH, Saudi Arabia — Japanese Prime Minister Shinzo Abe was in Saudi Arabia for talks with King Salman on Sunday as part of a tour of oil-producing Gulf Arab states aimed at promoting peace amid a spike in tensions between the U.S. and Iran.

Japan has a deep alliance with the United States, but it also has ties with Iran, which until 2017 supplied Japan with about 5% of its crude oil imports. Japan has sought to remain politically neutral as tensions in the Persian Gulf have escalated following President Donald Trump’s decision to withdraw the U.S. from Iran’s nuclear deal with world powers.

Security in the Persian Gulf’s waters and for Mideast oil supplies is a national security priority for Japan, which imports nearly 90% of its oil from the Middle East. Much of that is shipped from Arab Gulf states through the narrow Straight of Hormuz, which Iran partly controls.

Japan plans to deploy naval forces, a destroyer and two patrol airplanes off the coasts of Yemen and Oman to help protect its energy supplies, while keeping away from directly patrolling the Strait of Hormuz as the U.S. does.

Saudi Arabia is Japan’s top supplier of crude oil, accounting for about 39% of Japan’s overall crude imports. Iran is unable to sell its oil internationally as it once did, due to U.S. sanctions by the Trump administration.

Over the summer, Japanese energy supplies became a target of rising tensions when two cargo ships were mysteriously hit off the Gulf of Oman. No one claimed responsibility for the attack, although others that summer were blamed on Iran, which has denied involvement.

The attacks on Japanese-related cargo in June took place while Abe was in Iran meeting Supreme Leader Ayatollah Ali Khamenei and President Hassan Rouhani. He’d traveled to Tehran as an interlocutor for President Donald Trump to ease tensions.

Concerns of a wider conflict have grown in recent days following a U.S. airstrike in Baghdad that killed Iran’s powerful military commander, Gen. Qassem Soleimani. Iran retaliated, striking two military bases in Iraq where American troops are stationed, though no casualties were reported. Amid the chaos and heightened threats, Iran acknowledged Saturday it had mistakenly shot down a Ukrainian passenger jet, killing all 176 people aboard.

Abe is scheduled to visit the United Arab Emirates on Tuesday and Oman on Wednesday, before departing back to Tokyo. In the UAE, he will meet with Abu Dhabi Crown Prince Mohammed bin Zayed and other leading Emirati figures. In Oman, Abe will hold talks with the country’s new ruler, Sultan Haitham bin Tariq Al Said, who was named on Saturday following the death of longtime ruler Sultan Qaboos.

Abe is travelling with a delegation that includes ministers responsible for boosting trade and business ties.

While in Saudi Arabia, he is scheduled to visit the desert region of Al-Ula, which the kingdom is touting as a tourism destination, and will reportedly met the Saudi crown prince there.