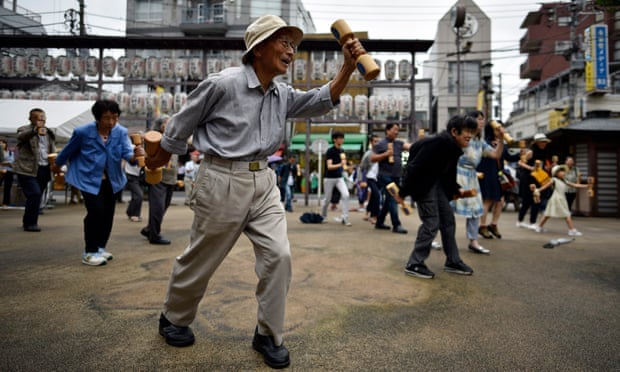 Number of people aged 100 or older reaches record high, with women making up 88% of total

The number of Japanese people aged 100 or older has risen to a record high of almost 70,000 over the past year – a cause both for celebration and concern over the social and economic challenges posed by the country’s rapidly ageing society.

Japan’s centenarian population was 69,785 as of September, with women making up 88% of the total, according to welfare ministry estimates reported by Kyodo News.

The data was released before Respect for the Aged Day on Monday, a public holiday when new centenarians – including the former prime minister, Yasuhiro Nakasone – will receive a commemorative sake cup and a letter of congratulations from the current prime minister, Shinzō Abe.

The dramatic rise in the number of people making it to their 100th birthday forced the government to reduce the diameter of the gift – a sakazuki – in 2009. Two years ago, the sterling silver cup was replaced by a cheaper silver-plated version to lessen the strain on government coffers.

The cost of honouring Japan’s super-elderly will continue to rise, however. The number of centenarians will exceed 100,000 in 2023 and reach 170,000 five years later, according to estimates by the National Institute of Population and Social Security Research.

Japanese women have the longest life expectancy, at 87.2 years, while men rank just below Switzerland and Australia at 81.01 years, according to a study published in the British Medical Journal last month.

Kane Tanaka, who is among the candidates seeking official recognition as the world’s oldest woman, was born on 2 January 1903 – the year the Wright brothers flew the first powered aircraft and Maurice Garin won the first Tour de France.

Tanaka, who lives in a nursing home in the south-western city of Fukuoka, enjoys playing board games and solving maths problems, Kyodo said, and has a taste for sweet bean buns and milky coffee.

Her compatriot Masazo Nonaka was recognised as the world’s oldest living man in April after the death three months earlier of Spain’s Francisco Nuñez Olivera. Nonaka, who lives in an inn he once ran in Hokkaido, northern Japan, was born on 25 July 1905, the year the Russo-Japanese war ended and Albert Einstein published his theory of special relativity.

Nonaka attributes his longevity to bathing in hot springs and eating sweets, but his daughter puts it down to his stress-free life, according to Guinness World Records.

Experts have attributed the steady rise in the centenarian population to regular medical examinations, universal healthcare and, among people over a certain age, a preference for Japan’s traditional low-fat diet.

But Japan’s super-ageing society is expected to put even greater strain on health and welfare services as the country’s working population continues to shrink as a result of the low birth rate.

Abe, who described Japan’s demographics as a national crisis during last year’s general election, has vowed to reform social security to allow workers aged 65 or older – who account for one in four of the country’s 127 million people – to stay in employment beyond the retirement age.

Moon Faces Toughest Challenge Yet in 3rd Summit With Kim