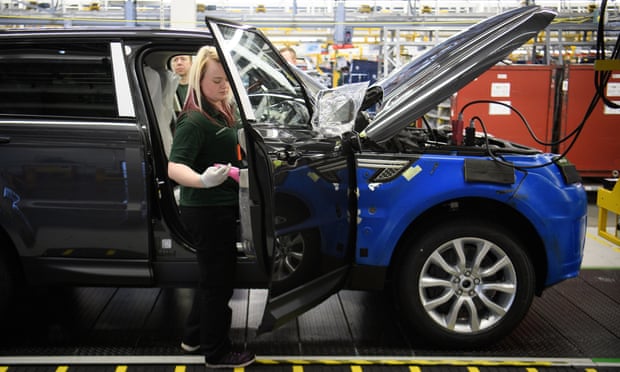 Jaguar Land Rover made the biggest loss in its history last year, sinking £3.6bn into the red as it wrestled with a weak Chinese market, falling diesel sales and a one-off downward revision to the value of its business.

Britain’s largest carmaker, owned by India’s Tata Motors, pointed to a return to profitability in the fourth quarter of its financial year, when it recorded a £120m pretax profit.

But the improvement was overshadowed by the vast loss for the 12 months to the end of March as a whole, which was mostly because of a write-down in the third quarter.

Half the £3.1bn non-cash charge was taken after JLR accepted that previous investments in property and machinery were worth far less than previously thought. The other half was attributable to goodwill impairments, an accounting correction that recognises future earnings potential is likely to be diminished.

Even excluding such one-off, non-cash items, the company still made a pretax loss of £358m, with revenues down from £25.8bn in 2017 to £24.2bn. This was largely caused by weakness in the Chinese market, where sales fell by 5.8% year on year to 578,915 vehicles, offsetting gains made in the UK and North American markets, where sales were up 8.4% and 8.1% respectively.

JLR, like some of its competitors in the automotive world, has also been affected by the impact of falling diesel sales amid successive global pollution scandals, as well as uncertainty related to Brexit.

The company announced plans to cut 4,500 staff this year and said its efficiency plans had already delivered £1.25bn of savings.

The JLR chief executive, Ralf Speth, said: “Jaguar Land Rover has been one of the first companies in its sector to address the multiple headwinds simultaneously sweeping the automotive industry. We are taking concerted action to reduce complexity and to transform our business through cost and cashflow improvements.”

The automotive expert Prof Karel Williams of Manchester Business School said JLR might be forced to scale back its production targets.

“It’s hard to see how this can be resolved without some rationalisation of the product range and without, in a sense, abandoning any aims to go for volume,” he said. “The Chinese market is clearly a problem and in all their other markets they face increasing competition in the SUV segment. There is a business here but the size of the business, that remains to be seen.”

He said the company also had a difficult task ahead to manage the transition to electric vehicles, where it has been left behind by competitors.

“They’ve been embarrassed by the shift against diesel. That was misfortune. Whether they have the nous to survive in the transition to battery electric is an interesting question,” he said. “The Chinese will try seriously to move into electric cars and the Germans will not easily cede their position as the conquerors of the last 30 years.”

JLR is among several major automotive companies to have issued grave warnings about the potential impact of Brexit on its UK business, particularly in the event of a no-deal scenario.

But despite concerns that JLR might further reduce its presence in the UK, the company made no mention of Brexit and detailed its plans for continued investment in British sites. This will include the assembly of electric drive units and battery packs in the UK and investment in the production of new Range Rover models at Solihull.

The carmaker did not make any reference to rumours that it had held talks about a takeover by PSA, the French company that owns Peugeot, Citroën and Vauxhall.