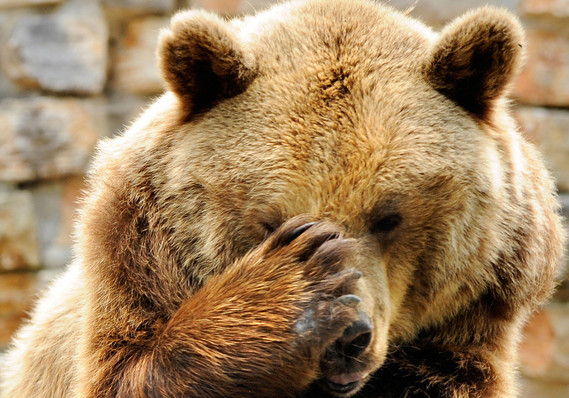 We may see a rebound, but the risk is rising as the bull market ages

Investors returned from the long Thanksgiving weekend still hungry, not for turkey but for more shopping — and stocks.

Retail sales on Cyber Monday were set to hit all-time highs, following record-breaking sales on Black Friday. That sign of consumer confidence spilled over into equity markets: The Dow Jones Industrial Average DJIA, +0.51% and the S&P 500 index SPX, +0.18% both surged 1.5% Monday, while the battered Nasdaq Composite index COMP, +0.23% jumped by 2%.

And yet Monday’s big news was a call by Morgan Stanley’s chief U.S. equity strategist Mike Wilson that U.S. stocks are in a bear market. For Wall Street’s relentless cheerleaders, that’s man-bites-dog news. But Wilson has been saying similar things since at least June, and rival Goldman Sachs has been warning that the risk of a bear market is the highest it’s been since at least the mid-1970s.

And many Wall Street strategists, including Savita Subramanian of Bank of America Merrill Lynch, expect 2019 to be a meh year, much like 2018. CNBC’s stock jock, Jim Cramer, threw his two cents into the pot, describing recent stock market action as “classic bear-marker behavior.”

Which all leads me to think we’re due for a big rally.

Stocks are deeply oversold, having already entered their second correction of the calendar year, a rare, ominous occurrence. Craig Johnson, chief market technician for Piper Jaffray, reports that as of last Friday, only three of the industry micro-groups he follows hit new highs, while 157 made new lows. That’s a washout.

And the months after midterm elections are historically strong. According to Ned Davis Research, the S&P has gained a median 18.4% in the nine months from Sept. 30 in midterm election years through June 30 the following year, vs. only 4.9% in nonvoting years. Since World War II, every midterm election has been good for stocks.

And so, ultimately, have corrections. According to Sam Stovall, chief investment strategist for CFRA Research, there have been 22 corrections (declines of 10% or more) since World War II. It took on average 264 trading days (about a year) for investors to recoup their losses.

I can see any number of catalysts for a rally — from a strong holiday retail season to even a modest deal on trade between President Donald Trump and China’s President Xi Jinping when they meet at the G-20 summit in Buenos Aires, Argentina, later this week.

But the most important one is that at some point people get tired of selling and decide to snap up bargains.

That may have started Monday. But will it mean the bull is alive and well again? I’m not so sure.

In about three months, we’ll be celebrating the 10th anniversary of this bull market, which from closing low to closing high propelled the S&P 336% higher. It’s not only the age of this bull that matters; previous market leaders like the FAANGs and home builders have been pummeled.

General Motors’ GM, -1.83% big restructuring and layoffs, announced Monday, show weakness in the most important market for consumer durables. Most forecasters expect slower U.S. gross domestic product growth next year (and in the rest of the world) as the sugar high of the 2017 tax cuts for the rich and big corporations fades, and we’re all stuck with the bill in the form of annual trillion-dollar deficits as far as the eye can see.

And, of course, there’s the Federal Reserve, whose chairman, Jerome Powell, has vowed to stick to his policy of “gradual” rate increases this year and next, while also continuing to shrink the Fed’s balance sheet, which ballooned to $4.5 trillion after three rounds of massive bond buying following the Great Recession.

Traders expect one more quarter-point rise in the federal funds rate at the Federal Open Market Committee meeting in December and two more early next year, which would put the fed funds close to 3%. Any clear pause in rate hikes would be bullish for stocks, but overall, the double-barreled Fed tightening is one of the main reasons investors have become skittish.

I can’t predict the future, and my last bear market “call” in January 2016 was clearly wrong. But almost three years later, risk is rising and whether or not you think this is a full-fledged bear, profit taking or strategic selling is just prudent risk reduction now.

That’s why I’d recommend that those of you who are within 10 years of retirement sell on rallies and reduce your stock position to no more than 50% of your total holdings. Those who are more than 10 years away should reduce your equity exposure to no more than 60%. We can never be sure when the bear will growl, but we can see by her tracks that she’s getting closer, and investors need to be prepared.