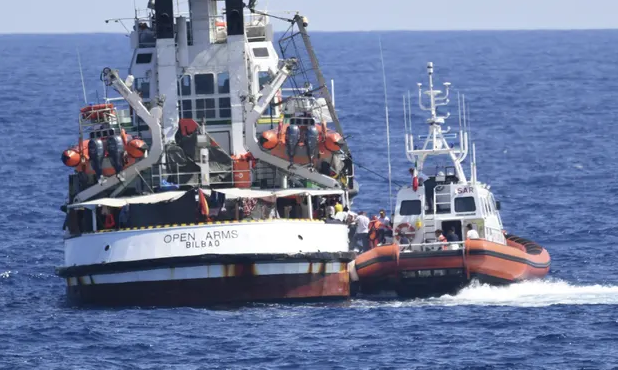 Italian prosecutors have ordered that 83 migrants onboard a charity vessel that has been anchored off the island of Lampedusa for 19 days must be immediately disembarked, citing the “explosive’’ psychological and medical condition of the passengers.

The announcement made by the magistrates came shortly after the Spanish government announced that it would send a naval ship to pick up the 83 migrants and bring them back to Spain.

It would have been the first time in the history of the migrant crisis that a member country of the European Union intervened with one of its ships, and in the territory of another member state, to recover asylum seekers who have been prohibited from landing.

But the turning point came Tuesday evening. After visiting the ship, prosecutors declared that the hygienic and health conditions onboard had “reached worrisome levels”. Prosecutors also ordered the ship impounded in order to carry out a full inspection of the health and hygienic conditions in which the migrants were forced to live due to Italy’s ban on landing asylum seekers.

‘’The situation aboard the Spanish NGO migrant rescue ship Open Arms is explosive,” Agrigento chief prosecutor Luigi Patronaggio said on Tuesday morning, before he travelled to Lampedusa by helicopter to monitor the situation and “restore calm so that no one gets hurt”.

Last weekend doctors from the Italian Order of Malta rescue unit reported that the migrants were “living piled on top of each other, with no possibility of walking”.

On Tuesday, another migrant jumped off the boat, in a desperate attempt to swim to Lampedusa, followed by two groups, one of nine and another of five, who launched themselves into the sea. The men were all rescued by the Italian coastguard, who brought them to a hospital. On Sunday, a few migrants had attempted the same escape and were rescued from the sea by Open Arms volunteers.

The Spanish defence minister, Margarita Robles, spoke of a “humanitarian emergency” onboard the Open Arms, declaring that Spain “will not look the other way as minister Matteo Salvini is doing”. The Spanish government said that a warship, Audaz, would depart from the military base of Rota in Cádiz, and take three days to arrive in Lampedusa before bringing the migrants to Mallorca.

“Spanish NGO, Spanish ship, Spanish port: rightly so. We are no longer the refugee camp of Europe,” said Salvini, reiterating his refusal to let them disembark.

However, a few hours later, prosecutors in Agrigento put an end to the standoff, which should stop the Spanish warship needing to intervene.

Last week the Sicilian magistrates also opened an investigation into unknown suspects for the kidnapping of the migrants aboard the Open Arms vessel. If the prosecutors go ahead with the inquiry Salvini risks being investigated once again for the same charge.

In January, an Italian court ruled in fact that Salvini should be tried for the kidnapping of 177 asylum seekers he prevented from disembarking the Italian coastguard ship, Ubaldo Diciotti, in August 2018. Salvini was eventually saved by the votes of the M5S, who ruled that the minister should not be stripped of his parliamentary immunity and the case fell apart.

There have been many standoffs between NGO vessels and Salvini, who has repeatedly declared Italian seaports closed to rescue vessels. But this one is set against the background of a political crisis after Giuseppe Conte resigned on Tuesday as Italy’s prime minister, blasting Salvini as “an opportunist who is only looking after his own interests and those of his party”.

Meanwhile, another charity vessel, the Norwegian-flagged Ocean Viking, operated by French charities SOS Méditerranée and Doctors Without Borders, with 356 migrants onboard, is waiting for a safe harbour.

As Italy and Malta are continuing to deny entry into their ports, Alarm Phone, a hotline service for migrants in distress at sea, fears that another shipwreck occurred on Saturday with over 100 people missing. “A fisherman told us about a boat turned upside down in the Libyan coast,” said Alarm Phone. Three men, from the Ivory Coast, were rescued and transported to a hospital in Tripoli. According to the survivors’ first testimonies to the fishermen, there were 178 people onboard.