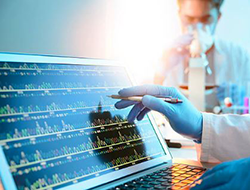 Bruehlman had been CFO at IMS Health for five years until it merged with Quintiles in 2016, becoming IQVIA. Since the merger, Bruehlman stepped away from the financial role and into an advisory one for CEO Ari Bousbib.

The seat, however, is not his long-term plan; he’s stepping in while the company seeks a full-time replacement for McDonnell, who announced his departure this week.

“I am excited to continue serving the company as we navigate through the COVID-19 situation, execute the strategy that we first envisioned at the time of the merger, and drive towards achievement of our Vision 22 goals,” said Bruehlman.

It comes amid a tough financial time for the CRO, and indeed the whole sector. Back in April, the CRO-analytics firm revealed 80% of its clinical research sites were “inaccessible due to limitations on the ability to travel to and access sites” given the pandemic.

It has, however, been projecting this hit will ease, seeing it go down to 70% through the second quarter, and 35% in the third quarter still inaccessible, but reckoned that “all sites [will be] open and accessible by the beginning of the fourth quarter.”

That was dependent on what the pandemic looked like; in the U.S., cases and now deaths are climbing again, so this may start to throw these projections off.

In its second-quarter results, IQVIA had to rethink the full-year guidance it gave at the start of the year, in which it projected full-year 2020 sales between $11.7 billion and $12 billion; that was revised down to $10.6 billion to $10.9 billion.

In its third-quarter results announced the day after Bruehlman took over, revenue was down just over 7% to $2.52 billion for the quarter. But there were positives, with Bousbib saying: “As we had assumed, the R&DS business saw a gradual increase in the accessibility of clinical research sites, exiting the quarter at 40% accessibility and currently at 53%, resulting in an improvement in the number of weekly onsite visits from the start of the quarter.”

This has also led it to upping its guidance for the year, though only slightly, from the $10.6 billion to $10.9 billion it announced in April to $11 billion to $11.1 billion; it points out, though, that the volatility of COVID-19 means this could still change.