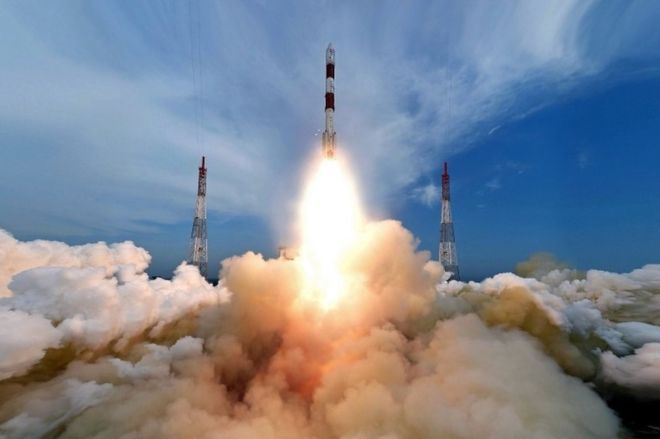 India has launched what it says is the world’s lightest satellite ever to be put into orbit.

Weighing only 1.26kg (2.6lb), the Kalamsat-V2 was made by students belonging to a space education firm.

It will help ham radio operators and “inspire schoolchildren to become the scientists and engineers of the future”, India’s space agency says.

Isro chief K Sivan has claimed that “Kalamsat is the lightest satellite to be ever built and launched into orbit”.

It is also the first to be built by a private Indian firm and launched by Isro.

The celestial unit will serve as a communications satellite for ham radio transmission, a form of wireless communication used by amateurs for non-commercial activities.

An even lighter satellite, weighing 64 grams and built by the same group of students, was launched on a four-hour mission for a sub-orbital flight from a Nasa facility in the US in June 2017. Sub-orbital spaceflights technically enter space, but do not get into orbit.

Kalamsat-V2 was made by students belonging to Space Kidz India, a Chennai-based space education firm.

So far nine satellites made by Indian students have found a place on space rockets.

In a first, the Indian space agency is also going to reuse a stage of the rocket that was used to launch the satellite.

Traditionally, rockets are expendable. Their various segments are discarded during an ascent. Fuel is also removed.

They end up as space debris – there are millions of discarded pieces of metal and other materials orbiting the Earth, ranging from defunct satellites to old rocket segments to accidentally dropped astronaut tools. Collisions can cause a great deal of damage, and generate even more pieces of debris.

The satellite was launched by Isro’s reliable Indian Polar Satellite Launch Vehicle (PSLV) – a four-stage rocket that on this launch weighs about 260 tonnes.

Its first three segments usually drop back to Earth; its fourth and final stage uses liquid propellants, and can be stopped and restarted several times to get a spacecraft into just the right orbit.

The fourth stage can take the the satellite to a height of 277km (172 miles) above earth.

But Isro gave new capability to the last stage so that it can remain active in space for up to a year.

“Why waste such a valuable resource? We decided to convert [the fourth stage] into an experimental orbital platform to conduct small experiments in space,” said Mr Sivan. The PSLV rocket costs upwards of $28m (£21m).

The experimental orbital platform will help researchers carry out experiments in a near zero-gravity environment.

Another satellite – the 740kg Microsat-R – was also taken into orbit by the PSLV. It will be used by India’s military to take high-resolution photos of Earth.

In this mission, the last stage of the rocket will be “moved to a higher circular orbit” from where the Kalamsat-V2 is expected to beam down its signals.

“This is the first time Isro is conducting such an experiment to reclaim a dead rocket stage and to keep it alive,” Mr Sivan said.

In this new approach, researchers can simply bring in their payloads or experiments which will then be plugged into the equipment bay especially made in the spent rocket.

Isro is the not the first space agency to try this “waste to wealth innovation”.

Jean Yves-LeGall, president of the Centre National d’Etudes Spatiales (CNES), the French space agency, says they have used it “but did not find it a cost effective way to conduct experiments in space”.