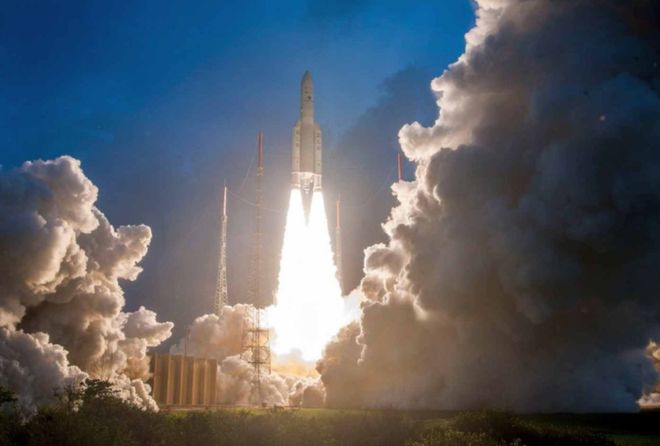 The Indian Space Research Organisation (Isro) launched the satellite from the Kourou spaceport in French Guiana early on Wednesday morning.

It will be placed in a geostationary orbit by the end of this month and its transponders will be switched on.

Isro chief K Sivan told reporters that the satellite will “play a vital role in providing broadband services across the country”.

Scientists say it will provide internet access to “off-grid” remote areas in India – hills and islands, for example – where traditional fixed-line broadband services are not available and would be helpful during emergencies and disaster relief. And it will also help provide internet connectivity during air travel in India.

There are more than 440 million internet users in India, and the number is expected to double by 2022.

However, slow speeds or lack of services still affect access in the remotest areas where is there is no cable connectivity.

India has emerged as a major player in the multi-billion dollar space market with dozens of communication and weather satellites in orbit.

In 2014, it successfully placed a space vessel in orbit around Mars, making it the first nation in the world to do so in its first attempt.

It also launched 104 satellites of varying sizes in one go in 2017, overtaking the previous record of 37 satellites launched by Russia in 2014.