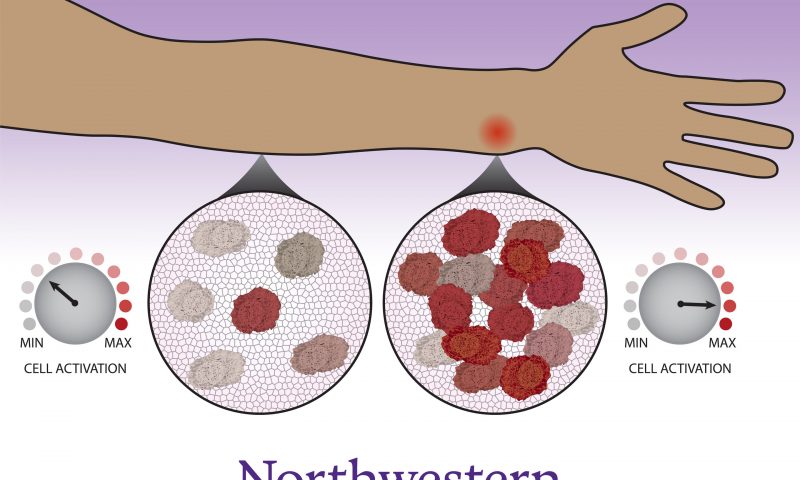 Study shows that cells congregate, coordinate with neighbors to decide whether to activate

Many people consult their friends and neighbors before making a big decision. It turns out that cells also are consulting their neighbors in the human body.

Scientists and physicians have long known that immune cells migrate to the site of an infection, which individuals experience as inflammation — swelling, redness and pain. Now, Northwestern University and University of Washington researchers have uncovered new evidence that this gathering is not just a consequence of immune activation. Immune cells count their neighbors before deciding whether or not the immune system should kick into high gear.

Understanding how to influence inflammation and activate an immune response could lead to new therapies to treat chronic autoimmune diseases or to mobilize the immune system to help fight cancer.

“This is a previously unrecognized aspect of immune function,” said Northwestern’s Joshua Leonard, who co-led the study. “The cells make a coordinated decision. They don’t uniformly activate but instead collectively decide how many cells will activate, so that together, the system can fend off a threat without dangerously overreacting.”

“A key part of this work relied on the development of new computational models to interpret our experiments and elucidate how cells perform calculations to make coherent decisions,” said University of Washington’s Neda Bagheri, who co-led the work with Leonard.

The research will be published on Feb. 13 in the journal Nature Communications.

The body’s immune system is constantly working to maintain a delicate balance. When a threat is introduced, the system needs to respond strongly enough to fight off infection or disease but not so strongly that it causes harm.

Leonard, Bagheri and their teams wanted to better understand how the immune system makes these types of decisions.

“It’s especially interesting because the immune system is decentralized,” Muldoon said. “Immune cells are individual agents that need to work together, and nature has come up with a solution for how they can get on the same page. Cells arrive at different activation states, but in such a way that, on the whole, the population response is calibrated.”

To explore this phenomenon, the researchers examined macrophages, a type of immune cell that is part of the first line of defense for combatting infection and disease. They observed how macrophages responded to a chemical produced by bacteria — a red flag that alerts the body to the presence of infection — using techniques that enabled the researchers to watch individual cells’ responses over time. They then used computational models to help interpret and explain these observations.

“Over time, the cells observe their surroundings to get a sense of their neighbors,” Muldoon said. “Each cell becomes poised to respond as a high activator or not. Now that we know there’s this additional layer controlling the immune system, it opens up a whole avenue to study whether there are new targets for immunomodulation.”

The researchers believe this information could be used to help design better drugs as well as to guide the engineering of advanced cell-based therapies.

“Biology has evolved so many fascinating and surprising ways to control complex processes,” Leonard said. “As synthetic biologists, we work to engineer cells to perform customized therapeutic functions, such as activating the immune system locally at a tumor site but not throughout the patient. Understanding nature’s innovations helps us to come up with new designs and enables us to be better engineers.”

How electric fields affect a molecular twist within light-sensitive proteins