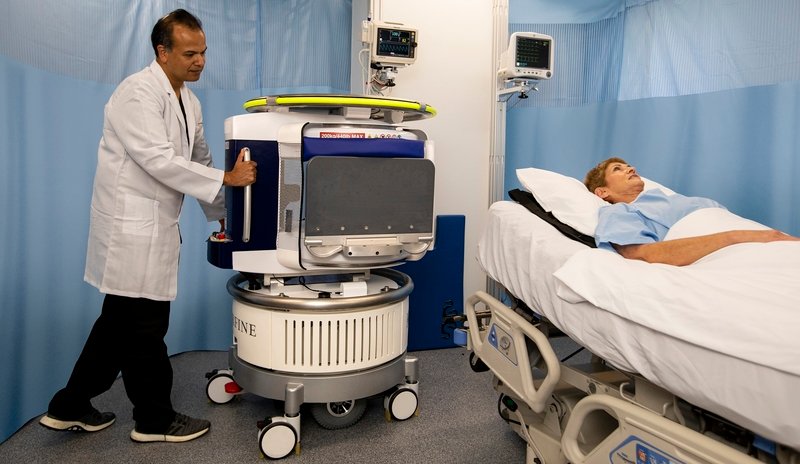 Portable MRI machine maker Hyperfine obtained a new clearance from the FDA, adding deep-learning algorithms that can boost the quality of images taken by its scanner-on-wheels.

The company’s Swoop device, small enough to fit inside an elevator, runs off a common electrical outlet and relies on permanent magnets and low-power radio waves to generate brain images.

Because it uses a lower field strength compared to traditional, fixed MRIs—which may weigh 10 times as much—the Swoop’s artificial intelligence programs aim to isolate and reconstruct the signal amid the noise while maintaining reasonable scanning times.

According to the former Fierce 15 winner, this process results in less-blurry images and can improve quality by 60%, making the machine a much stronger diagnostic tool.

“Improved image quality through artificial intelligence paired with the lower cost and bedside capabilities of Swoop are enabling greater access to high-quality MR imaging for patients, regardless of income, resources or location,” Hyperfine President and CEO Dave Scott said in a statement.

Hyperfine received an FDA green light early this year for AI programs that automatically measure the brain’s structure—such as the volume of cavities filled with cerebrospinal fluid as well as the brain’s alignment within the skull—to help clinicians diagnose acute neurological conditions. The Swoop system itself secured its first clearance in February 2020.

Since then the company pulled together a $90 million venture capital round to help fund the Swoop’s commercial rollout before announcing plans to go public through a three-way SPAC deal.

In addition to being listed on the Nasdaq through a reverse merger, the $580 million transaction would also see Hyperfine combine with Liminal Sciences, which is developing tech to measure brain-based vital signs such as intracranial pressure and blood flow.

Both Hyperfine and Liminal are products of the serial medtech entrepreneur Jonathan Rothberg, who also helped launch the handheld ultrasound developer Butterfly Network, which went public in its own $1.5 billion SPAC deal earlier this year.

Vertex once again talks up a tiny trial with positive read-throughs, this time for a genetically driven approach to kidney disease