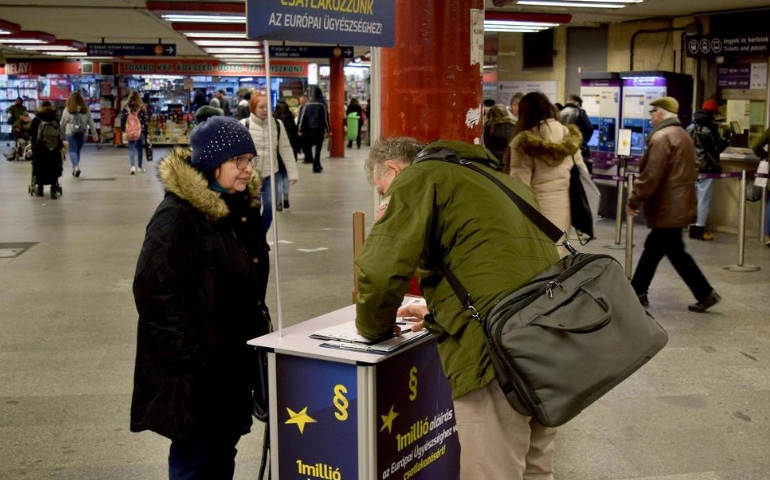 As the Hungarian prime minister’s conflicts with the European Union appear headed to a breaking point, calls are increasing for greater scrutiny of his government’s spending of EU funds.

BUDAPEST, Hungary — As the Hungarian prime minister’s conflicts with the European Union appear headed to a breaking point, calls are increasing for greater scrutiny of his government’s spending of the bloc’s funds.

An opposition lawmaker in Hungary has gathered more than 470,000 signatures to pressure Prime Minister Viktor Orban into joining the budding European Public Prosecutor’s Office, a new agency that will begin anti-corruption investigations into the use of EU funds starting in 2020.

The EU allocated Hungary 25 billion euros ($28.3 billion) in the 2014-2020 budget period, but critics say those funds have often been spent on overpriced or unnecessary projects that pad the pockets of Orban’s allies.

The petition comes just as Orban’s ruling Fidesz party may be suspended or expelled from the main center-right group in the European Parliament due to its fierce anti-EU, anti-migrant stance.

Despite Orban’s conflicts with Brussels — he thinks the EU bureaucracy has snatched power at the expense of its member nations — Hungary has been among the most successful EU countries in getting financial support from the bloc.

An EU proposal for the 2021-2027 budget period, however, could see Hungary’s subsidies cut by 24 percent compared to the current seven-year cycle — a budget restructuring necessitated in part by Britain’s impending departure from the bloc.

Independent lawmaker Akos Hadhazy launched a petition in September meant to gather 1 million signatures and pressure Orban’s government into joining the European Public Prosecutor’s Office. He and other critics have long maintained that Hungary’s chief prosecutor, Peter Polt, has failed to investigate many cases of suspected corruption, some even touching Orban’s family.

So far Hungary has rejected joining the European office, citing national sovereignty concerns and even misgivings about its quality.

Still, in Transparency International’s latest annual survey on public corruption, Hungary sits in 26th place out of the 28 EU countries, bettering only Greece and Bulgaria.

“There are two bastions that keep this populist regime in power — one is the chief prosecutor and the other is public media and government propaganda,” Hadhazy said while helping activists gather signatures. “(Polt) has been successfully attempting to whitewash the corruption affairs involving the Hungarian government … and the most prominent politicians.”

“In Hungary, the Chief Prosecutor’s Office investigates and has investigated all cases which it considered justified,” Szijjarto said.

The list of renovations and constructions in Budapest, the Hungarian capital, which were partly funded by the EU is long and imposing.

While Hungary may have to repay some funds to the EU for projects found not to comply with EU rules, observers say there’s plenty left over for Hungary’s favored elite.

“In the past years, it has become clear that there are a few businesspeople close to the government whose companies nearly always win the large public contracts,” said Katalin Erdelyi, an award-winning investigative journalist at the atlatszo.hu website. “The investments are frequently overpriced, costing much more than initial estimates.”

There are numerous white elephants in Hungary’s EU projects, too, ones built with the only apparent purpose of using up as much EU funds as possible, Erdelyi said.

One such endeavor is a bridge and “bicycle adventure park” running from the town of Hatvan, 60 kilometers (37 miles) west of Budapest. Safety concerns over its shoddy construction mean few bikers use the facility and what could have been a simple bridge resembles, without explanation, a meandering highway.

With hundreds of Hungarian media outlets backing the government and Polt considered to be frequently looking the other way, it’s often been up to Atlatszo and other journalists and watchdog groups to dig deep into the alleged corruption cases.

“It would be very good if Hungary joined the European Prosecutor’s Office,” Erdelyi said. “It would be much easier to uncover the deals suspected of corruption and confirm whether or not there was any misuse of European Union subsidies.”

On the European political front, Orban’s Fidesz party could be suspended or ejected from the EEP, the largest grouping of national parties in the European Parliament, when the party’s political assembly meets March 20.

For now, Orban has said repeatedly that he would prefer to stay in the center-right alliance but wants to transform it into an anti-immigration force.

His long-brewing conflicts with the EPP have been exacerbated by EU proceedings launched last year against Hungary over concerns about the deteriorating rule of law in the country and the erosion of democratic EU values since Orban’s return to power in 2010.

Istvan Hegedus, a former Fidesz lawmaker and now chairman of the Hungarian Europe Society, a Budapest-based civic group, says Orban, despite all his clashes with the EU, is unlikely to break Hungary away from the bloc, if only to keep getting those substantial EU handouts.

“The funds, in part, generated non-sustainable growth, but if these financial resources were to end, the Hungarian economy would be in a much more difficult situation,” Hegedus said, citing EU farm subsidies as vital for Hungary’s economy.

Though “he’s not there yet,” there could come a time — for example, if the radical right-wing populist breakthrough that Orban is predicting for Europe fails to materialize in the coming years — when Orban grows tired of what he sees as the EU’s increasing encroachment.

Orban “is a politician who thinks in revolutionary terms … and he may even try to risk leaving the EU,” Hegedus said, although Hungarians in general overwhelmingly favor EU membership. “He will have to think over 1,000 times whether he’ll give up these EU subsidies.”