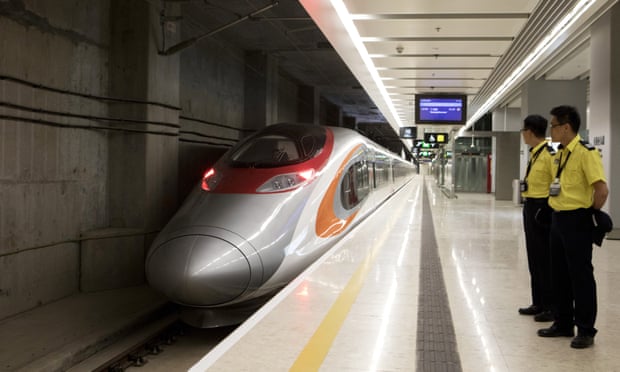 A new high-speed rail link between Hong Kong and mainland China has launched amid criticism the multi-billion-dollar project gives away part of the city’s territory to an increasingly assertive Beijing.

Chinese security has been stationed in semi-autonomous Hong Kong for the first time at the West Kowloon rail terminus, as part of a new “special port area” that is subject to mainland law.

Hundreds gathered at the terminus in the early morning, with the first train leaving for the southern Chinese city of Shenzhen at 7am.

“I’m not worried about the [mainland security] issue. They’re only here to work. The joint checkpoints are just to make things more convenient and make border crossing clearance faster,” one 39-year-old passenger who gave his name as Mr Chan said, saying he was travelling on the first train with his son.

Passengers cross through immigration and customs checkpoints into the mainland-controlled portion of the station, which includes the platforms and the trains, even though West Kowloon is miles from the border further north.

Under Hong Kong’s mini-constitution – the Basic Law – China’s national laws do not apply to the city apart from in limited areas, including defence.

Hong Kong also enjoys rights unseen on the mainland, including freedom of speech, protected by a deal made before the city was handed back to China by Britain in 1997. But there are growing fears those liberties are being eroded.

Officials argue joint checkpoints will make journeys easier for passengers as they need no further clearance after crossing into the mainland.

The new bullet trains to southern China promise to be far quicker than existing cross-border rail links, and long-haul services will cut journey times to Beijing from 24 hours to nine hours.

“This is definitely convenient in terms of time,” said one passenger who gave his name as Mr Kwok and was taking a train to visit his ancestral home in the southern Chinese city of Chaozhou.

But he added that tickets were expensive and the purchasing system inefficient, having queued for four hours ahead of Sunday to buy them.

A second-class ticket to Shenzhen costs $US11 (HK$86), while travelling to Beijing $US160.