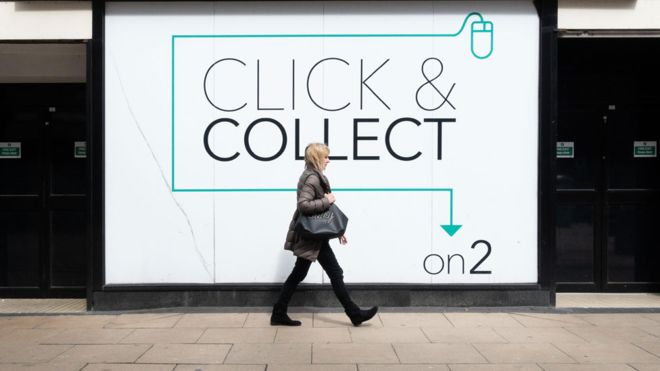 So many people have experienced the annoyance of the little card on the doormat, saying: “Sorry we missed you.”

According to consumer group Which?, 60% of those who ordered Christmas presents online experienced problems with delivery.

Keen to avoid parcels ending up in recycling bins or being chewed by the dog, more shoppers are choosing click-and-collect.

Could struggling retailers use the service to boost sales in-store?

Click-and-collect services are offered by retailers for online orders. Customers collect the goods at a local shop or designated pick-up point, such as a newsagent, when it’s convenient for them.

BBC News asked some of the UK’s biggest retailers how many online orders had been picked up in-store in 2018.

John Lewis confirmed that 50% of all online orders had been collected in-store, or in Waitrose shops also owned by the group.

Next also reported that about half of its online sales had been picked up in store via click-and-collect.

Amazon UK and Asos didn’t disclose their figures. But, their click-and-collect provider, Doddle, said customers now expected more when it came to delivery options – providing a new opportunity for retailers.

Kitty Poole, marketing and customer experience director at Doddle, said: “For years, home delivery has been the default delivery option – but that’s all changing.

“A combination of cost, convenience, trust and increasing consumer awareness about the environmental impact of delivery choices has brought about change.

“Click-and-collect has also started being competitively priced by forward thinking retailers, which is driving uptake.

“The lure of deciding when you collect and drop off parcels is a big one.”

Click-and-collect has some advantages for stores. Deliveries are less costly and complicated if they’re going to one shop, rather than multiple homes.

But, it also poses some challenges.

Logistics consultant Lynn Parnell said: “The space to store goods while they’re awaiting collection can be expensive, considering it’s taking away from the sales floor.

“Staff might also need more time to sort and organise click-and-collect only deliveries.”

She added retailers were having to develop additional technology to track deliveries, notify customers they’ve arrived, and match them to their parcel in-store.

Online spending in the UK reached a record 21.5% of total retail sales in November, according to the Office for National Statistics.

That dipped slightly in December, while the amount spent and the quantity bought compared with the previous month decreased by 0.9% too.

Analysts have suggested that the increasing popularity of online shopping, subdued customer demand and rising costs have combined to create a “perfect storm” for High Street stores.

The future of shopping?

With retailers having seen tough trading conditions and shop closures in 2018, it’s no surprise they might be keen to capture the extra footfall to boost physical stores.

In order to encourage additional spending in shops, Sports Direct offers £5 vouchers to online customers – redeemable only in shops where they’re picking up a parcel.

Other retailers, including John Lewis and Selfridges, now offer dedicated, or free, car parking spaces for those collecting goods.

The changing nature of online shopping has led some experts to question how bricks-and-mortar shops will adapt.

Retail analyst Clare Bailey said: “Click-and-collect is joining up the online and the physical.

“Retailers can save money and reduce their carbon footprint by having fewer home deliveries.

“I think the future will see shops become more of a showroom – where people try things out, go to tastings – before ordering to pick up later.”