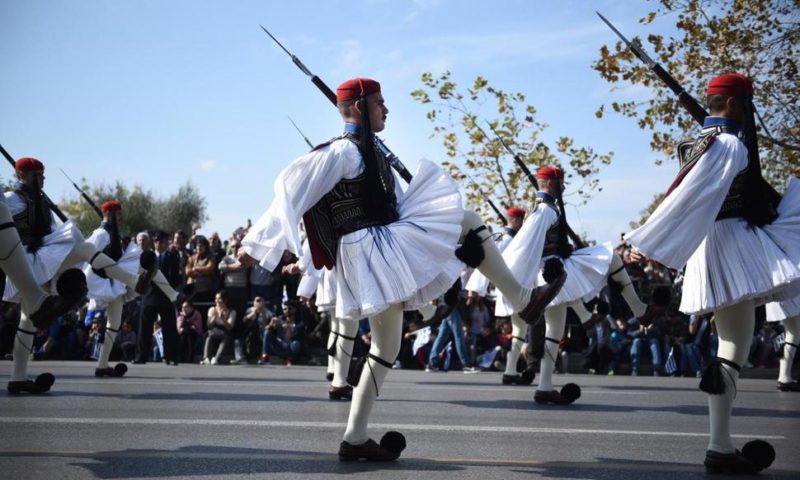 Mattarella appeared at the parade in Thessaloniki, northern Greece, at the invitation of Greek President Prokopis Pavlopoulos, who later hailed his counterpart’s presence.

“We are leaving behind what divided us. We are determined to defend Europe from … the forces of populism and racism, bordering on Nazism, that want to destroy Europe,” Pavlopoulos said. “(We are) determined never to let the revival of the nightmares that led to World War II happen again.”

Greek police on Sunday kept at bay a small crowd of protesters who wanted to march and protest the name change deal signed by Greece and Macedonia in July resolving a long-standing dispute over Macedonia’s name.

Some reservist units taking part in the parade shouted “Macedonia is Greek!” while marching past the VIP stand.

Defense Minister Panos Kammenos, the leader of a small right-wing populist party allied with the left-wing Syriza party in government, has opposed the Macedonia deal. While he was making a statement about the parade after Pavlopoulos, someone shouted “Resign! Save (Greek) Macedonia!”

“When the time comes,” the minister answered.

Thessaloniki, Greece’s second-largest city, is the capital of the Greek province of Macedonia. Greece had long objected to its neighbor to the north naming itself Macedonia on the grounds that the name implied territorial claims on the Greek province, as well as being an appropriation of Greek history and symbols.

Macedonia plans to change its name to North Macedonia so it can finally move past Greek objections and join NATO.

Italy invaded Greece on Oct. 28, 1940, from neighboring Albania, which it had occupied the previous year. The Italians expected a swift advance but were soon beaten back deep into Albania by the Greeks. The front stabilized by December and a major Italian spring offensive failed, prompting Germany to invade and occupy Greece and Yugoslavia in April 1941.

The two presidents then traveled to the island of Kefalonia, in western Greece, the site of a massacre of an Italian division by the Germans in September 1943, after Italy surrendered to the Allies.

The Germans attempted to disarm the 12,000-strong 33rd Italian Division, known as the Acqui Division, which, until then, had served as the main occupying force. The soldiers decided to resist the Germans; after nine days of fighting, and suffering 1,315 dead, the Italians surrendered. The Germans executed about 5,100 soldiers and a further 3,000, destined for concentration camps, died when the German ships transporting them, were hit by Allied planes. The massacre eventually became the subject of a 2001 Hollywood film, “Captain Corelli’s Mandolin,” based on the novel of the same name.

“A new Greece and a new Italy were born from the resistance against Nazism and fascism. After the terrible wars of the last century, the European Union chartered a new course for the European peoples, cementing peace, friendship and cooperation,” Mattarella said. “This day marks our resolve to continue on this path and avoid any danger of repeating the mistakes of the past.”