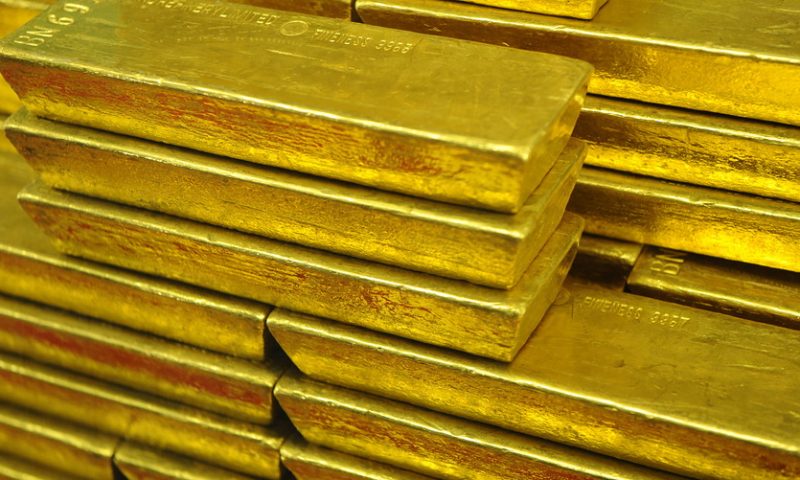 “Improving risk appetite is never good news for gold prices, which are trading a little lower at the start of the week. The fact that this is being driven by promising trade headlines is only further damaging the yellow metal,” said Craig Erlam, senior market analyst at Oanda, in a note.

The proposed tie-ups include discount broker Charles Schwab Corp. SCHW, +0.49%, which is set to acquire smaller rival TD Ameritrade AMTD, +1.08% in a roughly $26 billion all-stock deal, and luxury retailer LVMH, with plans to snap up U.S. jeweler Tiffany & Co. TIF, +0.02% for about $16.2 billion in cash.

Contributing to the positive tone, the Chinese government on Sunday released a document calling for more protection of intellectual property rights.

“The move suggests that key concessions are being made in order to increase the prospects of a partial U.S.-China deal, which is giving investors another opportunity to capitalize on risk-on trading activity,” wrote Han Tan, market analyst at FXTM, in a client note.

Remarks over the weekend by Robert O’Brien, the U.S. national security adviser, also were in the spotlight. O’Brien told reporters at a security conference in Halifax that a “phase one” deal between the U.S. and China by the end of the year still appeared possible, Reuters reported, while also warning that the U.S. would not “turn a blind eye to what’s happening in Hong Kong or what’s happening in the South China Sea, or other areas of the world where we’re concerned about China’s activity.”

Oil prices also slipped on Monday, with West Texas Intermediate crude futures for January delivery CLF20, +0.81% down 6 cents, or about 0.1%, at $57.71 a barrel on the New York Mercantile Exchange, as traders eyed positive signs on the U.S.-China trade front.

US Home Prices Rose 2.1% From a Year Ago