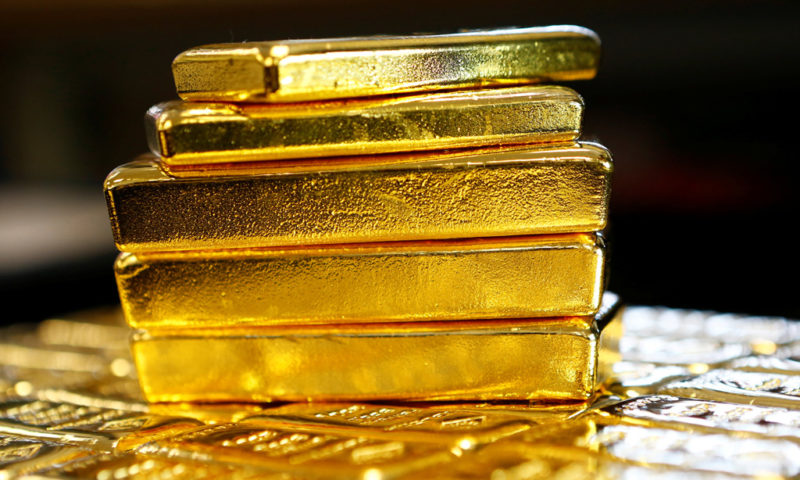 Gold rose on Thursday, supported by a weaker dollar and investors buying the metal to hedge against falling stock markets, keeping it near six-month highs hit in the previous session.

“The risk-averse sentiment is the most dominant force today. Investors are busy profit-taking in equities, which is benefiting gold,” said Naeem Aslam, chief market analyst at Think Markets UK.

A global equity rally fuelled by a dramatic surge on Wall Street ran out of steam on Thursday, after a fall in Chinese industrial profits offered a reminder of the pressures on the world economy.

“The recovery rally in stocks has not lasted long and the bearish sentiment is dominating again, which is supportive for gold,” a Germany-based analyst said.

Investor confidence in bullion was reflected in a surge in the holdings of SPDR Gold, the largest exchange traded fund. SPDR holdings rose 2.1 percent on Wednesday, their best one-day percentage gain since July 2016.

“There has been an extensive surge in the gold exchange traded fund holdings and there is absolutely no shortage of momentum there. Investors are just preparing themselves by buying gold as there are several uncertainties heading into 2019,” Aslam said.

SPDR holdings are at their highest level since August, and have risen about 8 percent since touching more than 2-1/2-year lows in October.

Meanwhile, sterling-denominated gold hit its highest since September 2017 at 1,010.80 pounds on Thursday.

“Clearly, investors are hedging their bets ahead of the big (Brexit) vote in January,” Aslam said.

European Commissioner Guenther Oettinger said on Thursday there is still a chance that Britain’s parliament will vote in favour of the Brexit agreement in January and that there was no public support for a disorderly Brexit or another referendum.

“The outlook for gold is much brighter now as we broke the 200-day moving average last week,” said ABN AMRO analyst Georgette Boele, adding that a weaker dollar was also helping gold.

The dollar index, a gauge of its value versus six major peers, slipped 0.2 percent on Wednesday, making gold cheaper for holders of other currencies.

A partial U.S. government shutdown was widely expected to continue after Congress reconvenes on Thursday, with lawmakers split over President Donald Trump’s demand for $5 billion in taxpayer funding for a proposed Mexican border wall.

Among other metals, silver was up 1 percent to $15.19 per ounce, after hitting its highest level since mid-August at $15.18.

Oil slips back toward 18-month lows on oversupply

Samsung Electronics to bottom out