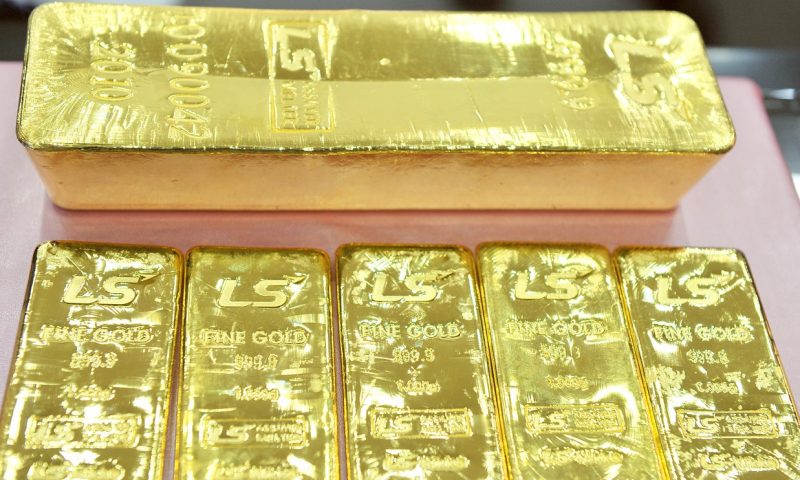 Gold futures ended higher on Thursday to tally their first gain in four sessions, as a recent price drop to a two-month low raised the precious metal’s appeal among bargain hunters.

Prices for the metal had been trading lower early in the session, and remains more than 4% lower for the week, with overall strength in the dollar contributing mightily to the deterioration in bullion.

Chintan Karnani, chief market analyst at Insignia Consultants, attributed the shift higher in prices to “a short covering rally” given the “oversold conditions.”

He added that “pre-U.S. presidential jitters” will ensure that weakness in gold will not last long.

The dollar weakened a bit in Thursday dealings, though was poised for a weekly rise of 1.5%, which would mark its strongest weekly climb against a basket of a half-dozen currencies, as measured by the ICE U.S. Dollar Index DXY, -0.05%, since the period ended April 3, according to FactSet data. Strength in the dollar tends to pressure prices for dollar-denominated commodities, such as gold. Investors turned to the U.S. dollar amid rising concerns about the global economic outlook and increased cases of COVID-19.

“Silver has a tendency to take a very long time to rise whenever there is big crash,” said Karnani. For now, there’s “cautious optimism in silver.”

Gold and silver had been trading lower as a weekly reading of those seeking unemployment benefits, used as a running gauge of the health of the economy amid the viral pandemic, came in somewhat weaker than expected.

Weekly jobless claims rose 4,000 to 870,000, the Labor Department said Thursday. Economists surveyed by MarketWatch had been looking for claims to decline to 850,000, reflecting that slightly more Americans applied for state unemployment benefits in the week ended Sept. 19 than in the prior week. Claims in the prior week were raised by 6,000 to 866,000.

He emphasized that there wasn’t one catalyst for gold to rise, but rather a “combination of factors leading to buying,” including the oversold conditions.

Illumina to pay $8B to reacquire cancer blood test maker Grail, with all eyes on 2021