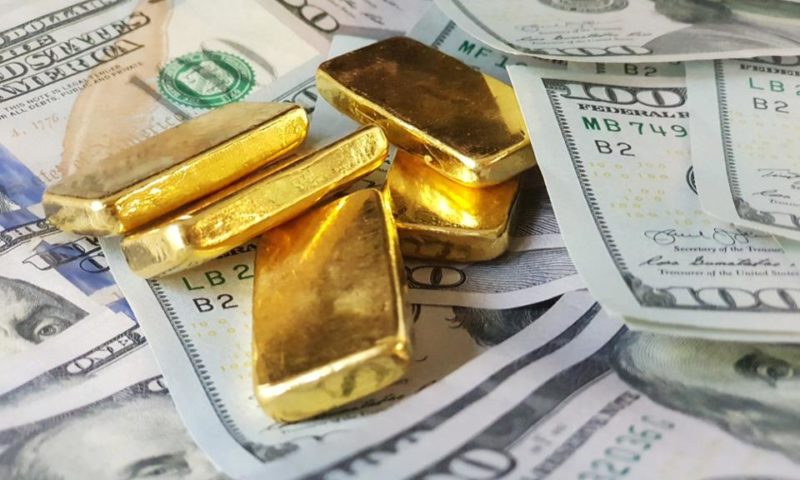 It has taken a while, but gold is now doing exactly what it is supposed to do as the metal ends the week near a three-month high as U.S. equity markets continue to melt down and bond yields drop.

The gold market is seeing its fourth week of consecutive gains and is on pace to end a six-month downtrend. December gold futures are trading near a three-week high, last trading at $1,243 an ounce, up more than 1% from the previous week. So far this month the yellow metal is up almost 4%. 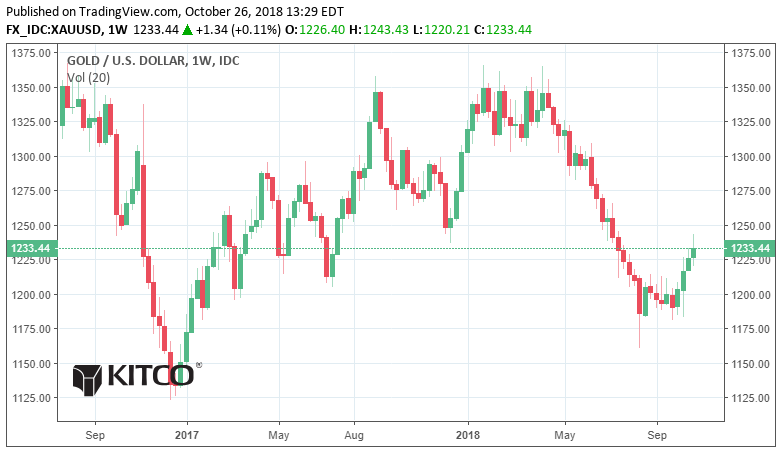 While gold is benefiting from safe-haven flows, silver investment demand remains lackluster. The precious metal is seeing its second week of gains but has underperformed compared to gold. The gold-silver ratio on Kitco.com remains near its August 23-year high, last trading at 84.20 points. December silver futures last traded at $14.775 an ounce.

“It’s a proper risk-off environment and I wouldn’t be surprised to see further weakness in the near-term,” said Fawad Razaqzada, technical analyst at City Index. “People are moving out of equities and into safe-haven assets and that is what is driving gold prices.”

Jim Wyckoff, senior technical analyst at Kitco.com, also noted that equity market weakness is helping gold prices and expects this trend to continue. “Look for gold prices to continue to appreciate as long as there is turmoil in the marketplace,” he said.

Christopher Vecchio, senior currency strategist, at DailyFX.com is also near-term bullish on gold as technical momentum is supported the rally.

“We are seeing equity markets drop along with bond yields, which means real interest rates are falling making gold an attractive investment,” he said. “Traders and investors need to start looking at gold as a long-term asset.”

Is The Market Moving Too Far Too Fast

While Razaqzada sees potential for gold to push higher in the near-term, he also cautions investors to curb their enthusiasm a little. He explained that markets appear to have moved too far too fast and the selling momentum in equities along with the buying momentum in gold could be unsustainable.

Bill Baruch, president of Blue Line futures, said that although there is potential for gold to move higher in the near-term, he also warned investors to use caution at current levels.

“When gold is doing what it is supposed to that is when I get worried,” he said. “I have been buying gold around $1,200 in anticipation for this rally and now I see major resistance on the horizon,” he said. “I think now is the time to take profits and step out of the market.”

For investors who are looking to stay in gold, Baruch recommended that they protect their position by buying put options and selling call options.

One reason some market analysts are warning gold investors to use discretion at current levels is that the market could soon start preparing for what is expected to be the Federal Reserve’s fourth rate hike of the year in December.

Historically, gold prices tend to suffer ahead of a potential rate hike as bond yields move higher and the U.S. dollar strengthens. Currently, the market is pricing in a67% chance of a rate hike. Although expectations are down from 80% last week, expectations are still high for another rate hike.

“Through most of the year, gold has been weak because of strong fundamental reasons and those haven’t gone away as we expect the Fed to raise interest rates again in December, said Razaqzada.

Commodity analysts at Capital Economics said that interest rate expectations could come to the forefront and weigh on gold next week following the release of October’s nonfarm payrolls report Friday.

“If we are right and next Friday’s U.S. employment report is strong, gold could come off its recent highs,” they said.

Despite strong expectations for another move up in interest rates, Vecchio said that he doesn’t think this is a significant factor for the gold market.

“Traders are looking at gold knowing that interest rates are moving higher, but the Fed has outlined a fairly hawkish path for interest rates that some are now thinking are not realistic,” he said. “Because the Fed is so hawkish, the only move they can now make is dovish.”

Economists have noted that Friday’s third-quarter Gross Domestic Product continues to support a December rate hike as the U.S. economy grew a solid 3.5% between July and September. However, economists also noted that there are some growing warning signs in the market.

Economists noted that business investment in the third quarter was relatively flat and residential investment dropped 4%, adding to further weakness in the housing sector. Exports were also down as imports grew, creating an overall drag on the economy.

“Overall, fiscal stimulus is keeping headline GDP growth strong for now. But that boost will eventually fade and higher interest rates will weigh more heavily, which is why we expect GDP growth to slow below 2% next year. That in turn should prompt the Fed to stop raising rates by the middle of 2019, sooner than markets or Fed officials themselves anticipate,” Michael Pearce, senior U.S. economist in a research note published Friday.

With momentum still firmly on gold’s side, analysts say the critical level to watch in the near-term will be the $1,260 an ounce level, which represents the July high.

“If gold can get back above the July high then I think we need to look at $1,300 as a target again,” said Vecchio.

After a relatively quiet week for economic data, the docket picks up next week with the release of important economic reports.

Finally, the week ends with the release of the government official employment report.