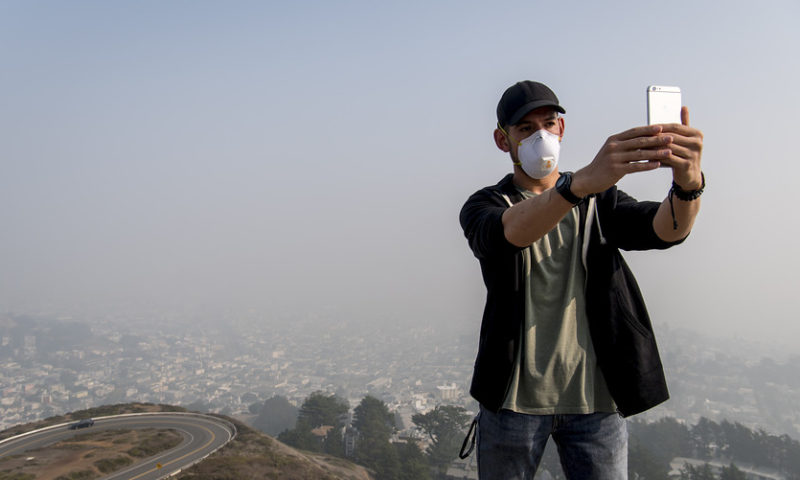 Despite strong earnings results, doubts about holiday sales and chip sector lead to a bloodbath for stocks in third quarter

A devastating and deadly fire has choked Silicon Valley with smoke for nearly two weeks, making it hard to breathe and clouding the ability to see into the distance.

The view of the Valley’s core industry is not any clearer or easier to stomach at the moment. As the smoke has hung over the Bay Area, dark clouds of doubt have also arrived from Wall Street, as the peak of tech earnings season has ended with little clarity on how long the tech boom can last.

“Similar to the air quality in the Valley, the near-term outlook remains smoky (cloudy) with pockets of demand weakness and uncertain political/tariff effects,” Matthew Ramsay, a Cowen & Co. analyst who just led an investor tour on a visit of more than a dozen chip companies in Silicon Valley, wrote in a note.

Last week’s flurry of reports largely brought a close to tech’s earnings season, and the reviews are in. The Nasdaq Composite Index COMP, -1.70% fell 3% Monday and then 1.7% Tuesday. The tech-heavy index has dropped 1,000 points since this quarter began, and is down more than 10% in the past three months. All of the FAANG stocks are in a bear market as of Tuesday, leaving Microsoft Corp. MSFT, +1.16% as the only mega-cap tech company less than 20% off its peak.

The downfall is not due to the numbers reported so far this quarter, which, as a whole, destroyed analysts’ expectations. The information-technology sector of the S&P 500 index SPX, +0.63% had earnings growth of 24% and sales growth of 10.7%, while analysts had predicted 13.6% and 8.5% respectively, according to FactSet, with nearly 90% of companies reported. The new communication-services sector — which was created earlier this year and includes big names such as Google parent Alphabet Inc. GOOGL, +1.43% , GOOG, +1.19% Facebook Inc. FB, +2.09% and Netflix Inc. NFLX, +1.32% — reported earnings growth of 31.9% and sales growth of 19.4%, against expectations of 22.3% and 16%, with all companies reporting.

The problem is not in the huge money tech companies brought in, but the expectations for the holiday season. Two of the biggest names in tech, Apple Inc. AAPL, +0.88% and Amazon.com Inc. AMZN, +2.53% , predicted huge sequential declines in their revenue growth rates for the holiday season. Apple and Amazon have shed more than $350 billion in market valuation combined this quarter, as of Tuesday’s close, just months after Apple won the race for the first trillion-dollar valuation.

Apple and Amazon have legitimate excuses for a decline in sales growth next quarter. Apple released its more expensive iPhones in the record quarter it reported last month, yet will now face comparisons with the launch quarter for the original iPhone X, which will be tough to beat with the cheaper XR. Amazon changed some revenue recognition regarding Prime subscriptions that likely moved many billions of dollars to other quarters.

Those stocks might not have been hit so hard if it wasn’t for a potential warning sign flashing elsewhere in tech.

Large semiconductor and chip-equipment manufacturers signaled a widespread downturn for at least the next quarter or two in their reports this season, and that is worrisome. Semiconductors are often seen as a leading indicator of economic trends, especially technology demand, because of where they are in the global supply chain. They have enjoyed strong gains in recent years as the data-center boom, advances in machine learning and other needs have caused demand for silicon to spike.

The Trump administration’s trade war with China and the effects of the higher costs of goods is causing some companies to pause. At the same time, the prices of memory chips, a key component in many tech products, are falling, hurting former highflier Micron Technology Inc. MU, +2.74% Slowing demand, combined with lots of inventories on hand, is a recipe for a slowdown, as Nvidia Corp. NVDA, +1.90% proved in a dramatic finale to earnings season last week.

The takeaway generally has been that the environment sharply shifted in the sector this fall. While the long-term outlook for chips may not have changed much, we may be seeing the first slowdown on that road.

“In short, near-term things are tough and investor worry is high despite long-term secular drivers in data center, autos, IoT/industrial and gaming,” Cowen’s Ramsay wrote. “Overall, we believe the environment slowed sharply in mid-September and companies across the group hadn’t fully digested this during this earnings cycle.”

There are few bright spots elsewhere in tech. Facebook and Alphabet are engulfed in issues, neither of which will help their reputations as they fight for tech talent in the Bay Area. While cloud software is still a darling for investment analysts, many welcome a pullback for potential consolidation in that sector, after recent large acquisitions by SAP SE SAP, +1.55% and International Business Machines Corp. IBM, +0.64% carried large price tags.

For residents of Silicon Valley, struggles on the stock market for the large tech companies are far down a priority list that begins with putting out the worst wildfire in state history, mourning the dead and protecting ourselves from the toxic air all around us. Wall Street, however, seems more concerned with what will grow once the smoke clears, and that forecast is hazy.

Dollar’s bounce drags rivals across the board