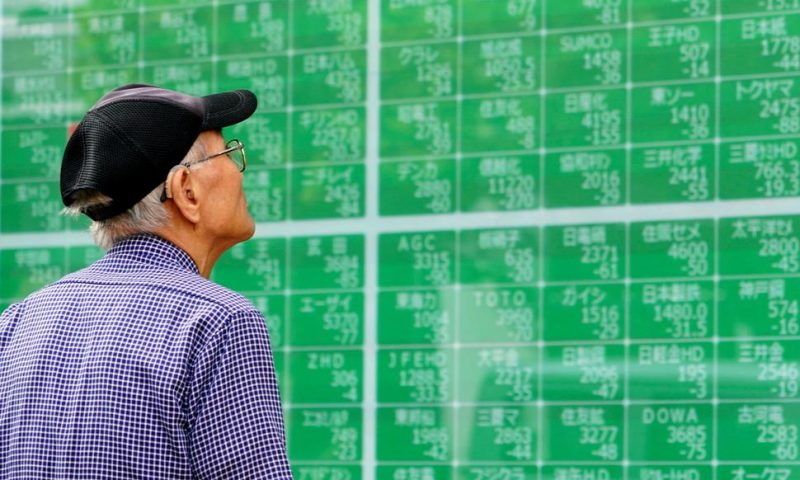 Global shares are mixed after China said its top trade envoy and other senior officials spoke by phone with U.S. negotiators.

TOKYO — Global shares were mixed Tuesday after China said its top trade envoy and other senior officials spoke by phone with U.S. negotiators.

The lackluster session followed a rally of technology shares on Wall Street prompted by China’s new guidelines for the protection of patents and copyrights. Theft of intellectual property has been a big sticking point in the U.S.-China trade war.

Markets saw the stricter guidelines as an encouraging sign for negotiations on the first phase of a deal aimed at ending the tariff war between the world’s two largest economies.

“There is renewed hope on some progress of U.S.-China trade talk after China’s state-backed news media Global Times said that both sides are ‘very close’ to phase one deal,” said Zhu Huani, at Mizuho Bank in Singapore.

Still, an announcement by China’s Commerce Ministry early Tuesday that top trade negotiators from both sides spoke by phone and agreed to continue talks did not seem to spur significant gains. That might be because the vaguely worded notice did not mention specifics or indicate how much progress has been made.

Earlier, the plan was that Trump and Chinese President Xi Jinping might meet and sign an agreement at a Pacific Rim summit in Chile. That was cancelled due to political unrest, and so far there has been no announcement of plans for a meeting elsewhere.

“Surely both sides aren’t going to walk us down the garden path only to take us down the rabbit hole again with Trump and Xi,” Stephen Innes of AxiTrader said in a commentary.

Hong Kong’s Hang Seng declined 0.2% to 26,939.21, despite a relatively strong start for e-commerce giant Alibaba, whose shares began trading on the Hong Kong exchange on Tuesday.

U.S. stocks have been rallying for weeks as worries about a possible recession have faded. A resilient job market, which helps households continue to spend, and three interest-rate cuts by the U.S. Federal Reserve have bolstered confidence.

ENERGY: Benchmark crude oil fell 10 cents to $57.91 per barrel in electronic trading on the New York Mercantile Exchange. It rose 24 cents to $58.01 a barrel on Monday. Brent crude oil, the international standard, lost 5 cents to $62.57 a barrel.