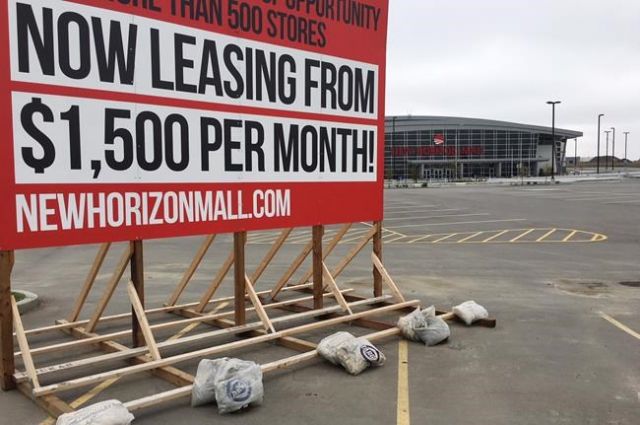 The developer of a nearly empty new mall just north of Calgary says he’s confident it will become the bustling Asian-style bazaar it is meant to be despite having to delay its late-October grand opening until sometime next year.

Only nine of 517 retail spaces in the mall have opened for business since owners were allowed to take possession in May, said Eli Swirsky, president of The Torgan Group of Toronto.

“I love the mall. I think the mall will be fine,” he said in an interview. “I wish it was faster, of course, but every time I go there I’m awed by its size and potential and I think we’ll get there.

“I’m not at all giving up. I think everyone will be happy.”

He said he expects there to be 20 stores open by the end of September but wouldn’t commit to a grand opening date, saying it will be set when a “critical mass” of 80 to 100 stores are open, possibly by year-end but more likely next spring.

The optimistic outlook stands in contrast to the eerily empty glass cubicles and “For Lease” signs in the freshly painted mall located south of the always-crowded CrossIron Mills outlet shopping centre that opened in 2009.

Delaying the grand opening is a good idea given the mall’s deserted shops, said Rami Tawil of Silk Road Importers, a retailer of men’s and women’s undergarments from the Middle East. He moved to Canada from Syria three years ago and is leasing his small space from its owner.

“I think now it’s better if we push it a couple of months because we need more stores here to open,” he said. “We need the people coming to see more stores.”

The New Horizon Mall is modelled on The Torgan Group’s Pacific Mall in the Toronto area that opened about 20 years ago.