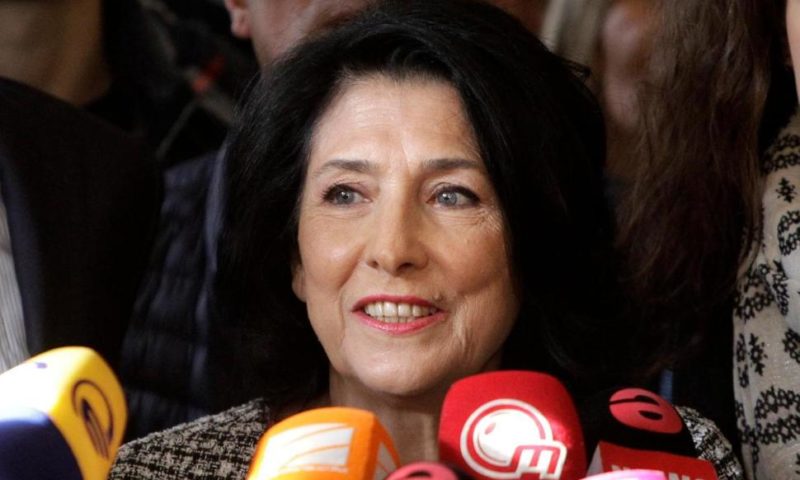 The Central Election Commission said that Salome Zurabishvili had won nearly 60 percent of the vote, while her rival, Grigol Vashadze, polled just over 40 percent in Wednesday’ ballot.

Zurabishvili, 66, ran as an independent, but was backed by the ruling Georgian Dream party. Vashadze, 60, was supported by a coalition of opposition forces led by former president Mikheil Saakashvili’s United National Movement. Both candidates served stints as Georgia’s foreign minister.

Georgia, a country with 4 million people in the volatile Caucasus region, is transitioning to a parliamentary republic, with the prime minister becoming the most powerful figure in the country. After the new president’s six-year term ends, future heads of state will be chosen by delegates.

“Our choice is a peaceful Georgia, a united country and of equal citizens,” Zurabishvili said. “Our choice is the dialogue with those parts of society who today have not voted for me and who today don’t agree with us. But we all are citizens of one country.”

Even though presidential powers have been trimmed, the election was seen as a crucial test for Georgian Dream, which is led and funded by billionaire Bidzina Ivanishvili, who made his fortune in Russia.

Georgian Dream has controlled parliament and dominated the nation’s political scene since defeating the United National Movement in 2012. While its popularity has waned, the outcome of the vote indicated that Saakashvili’s party has failed to make decisive gains.

After the polls closed, Saakashvili spoke on Rustavi 2 television, claiming that the vote was rigged and calling for protests to annul the results. It wasn’t immediately clear if Vashadze would challenge the results of the vote.

“People are tired with disarray,” said Otar Gabelashvili, a pensioneer from Tbilisi. “For the past 20 years we have been struggling with demonstrations and unrest.”