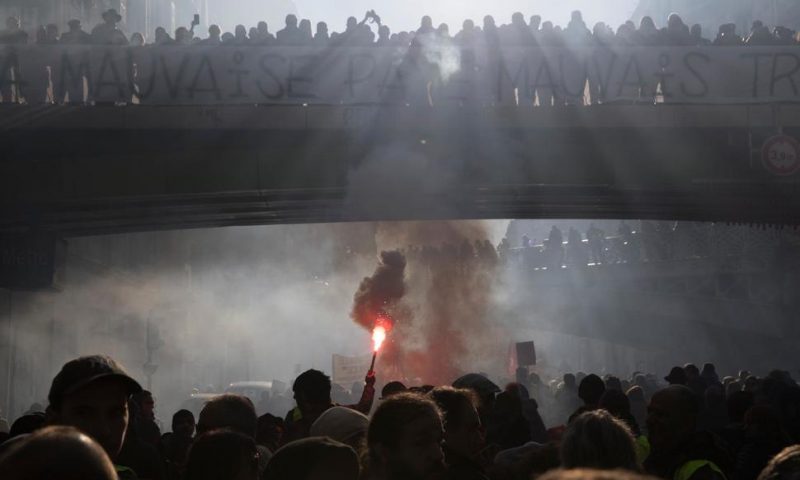 Nationwide protests and job walkouts have taken place in France for the fourth time since railway workers went on strike over President Emmanuel Macron’s plans to overhaul the country’s pension system.

Street protests were staged in Paris and other French cities as the government and labor unions pushed on with negotiations aimed at ending railway strikes over the proposed changes that started on Dec. 5.

The Paris march started from the Republique square in the city center and was accompanied by a large police presence. The Elysee presidential palace was barricaded as protesters were due to head toward the area.

Unions said the protest in the capital attracted 370,000 demonstrators, while French consulting firm Occurrence estimated a crowd of 44,000.

By the time the demonstration winded down, 20 demonstrators and 16 police officers had been injured, according to the Paris police department. Officers made two dozens arrests amid occasional flares of violence, Paris police said.

The Eiffel Tower was closed to visitors as employees joined the protest. Paris Metro traffic was severely disrupted, except for one automated line running normally.

The national rail company, SNCF, said about one-third of its workers were on strike Thursday, the 36th day of the strike by railway workers. Three high-speed trains out of five were in operation. Regional trains were also affected. and many schools were closed.

Unions have also called on workers to block road access to major ports, including in the southern city of Marseille.

Philippe Martinez, head of hard-left CGT union, said “there are many people on strike” yet the government doesn’t appear “willing to discuss and take into account the opinion of unions.”

Talks between the government and labor unions resumed Tuesday but no compromise has been found. A new round of negotiations focusing on the financing of the new pension system is scheduled for Friday. Macron has asked his government to find a quick compromise with reform-minded unions.

So far, the government is sticking to its plan to raise the full retirement age from 62 to 64, the most criticized part of the proposals.

The changes aim to unify France’s 42 different pension schemes into a single one. Under specific pension schemes, some people, like railway worker, are allowed to take early retirement. Others, like lawyers and doctors, pay less tax.

Unions fear people will have to work longer for lower pensions, and polls suggest at least half of French people still support the strikes.

Spain Government to Have 5 Members From Anti-Austerity Party