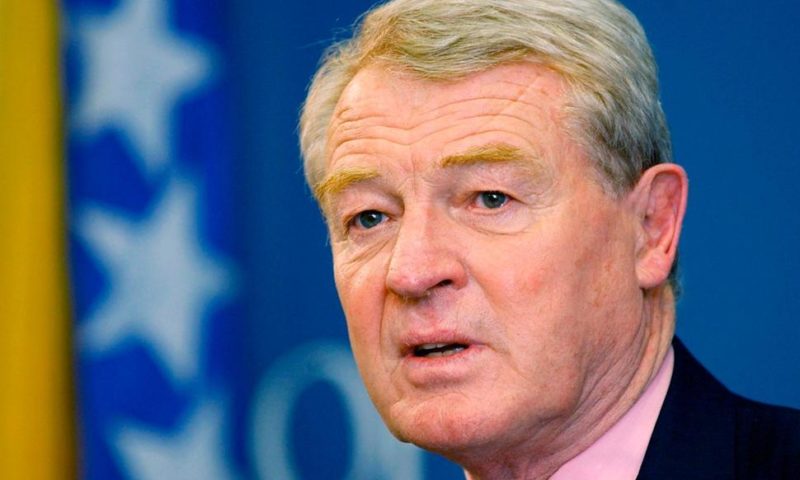 The Liberal Democrat party has announced the death of former leader Paddy Ashdown after a short illness.

LONDON — Britain’s Liberal Democrat party has announced the death of former leader Paddy Ashdown after a short illness. He was 77.

The popular, articulate Ashdown was for decades a prominent figure in Britain and continental Europe. He was known for his intellect, outspoken nature and wit.

Ashdown received a knighthood and was made a member of the House of Lords, but was the sort of person almost everyone called Paddy.

He was a former Royal Marine commando who helped build the Liberal Democrats into a force to be dealt with in Parliament, raising the party’s profile considerably by helping it amass a total of 46 seats in 1997, its best result in more than seven decades.

He ran the party with military-style discipline, yet was always warm on a one-to-one basis. He made time for just about everyone who sought him out.

Current party leader Vince Cable said Saturday that it was a “hugely sad day” and that everyone across the political spectrum “had immense affection and respect for Paddy.”

“He was famous for his politics, but his talents extended well beyond that arena,” said Cable. “He was an accomplished author, and had spent many years serving the country before he got near the House of Commons.”

Ashdown’s influence also went beyond Britain. He served as high representative for Bosnia and Herzegovina in 2002 and had been a forceful advocate for international intervention during the conflict in the former Yugoslavia.

Longtime opponent John Major, a former prime minister from the Conservative Party, said Ashdown was “a man of duty, passion and devotion to the country” he loved.

“In Government, Paddy Ashdown was my opponent. In life, he was a much-valued friend,” said Major. “His loss will be felt deeply by many — and not least by myself.”

Ashdown’s political fortunes were damaged by news stories about a five-month affair with his secretary — one tabloid memorably dubbed him “Paddy Pantsdown” — but his marriage and career survived.

He was born Jeremy John Durham Ashdown but preferred to use his schoolboy nickname Paddy.

Ashdown was born in India, the son of an army colonel, but the family returned to Northern Ireland when he was five and he spent most of his youth there.

He joined the Royal Marines in his teens and served in the Special Boat Service.

Ashdown married his wife Jane in 1961.

He said last month he was being treated for bladder cancer but downplayed the diagnosis. He told a local newspaper he had great confidence because he was “lucky enough to have the magnificent help of our local hospital, and my friends and family.”

Ashdown is survived by his wife, his children and grandchildren.

Tsunami From Erupting Krakatau Kills at Least 222 in Indonesia