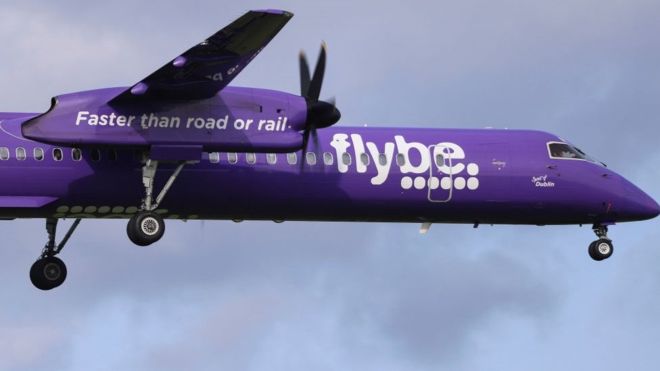 Flybe has warned shareholders it will wind up the company if they do not back a sale to a consortium led by Virgin Atlantic and Stobart Air.

The airline said failure to approve a sale would mean investors were unlikely to get anything for their shares.

The airline’s board agreed the £2.2m sale to Connect Airways group last month, but the deal needs investor approval at a meeting on 4 March.

Flybe acknowledged the offer of 1 penny per share was “disappointingly low”.

However, it said it was the only rescue plan on the table.

In a statement on Thursday, Flybe said: “If the [sale] scheme is not approved, the Flybe directors intend to take steps to wind-up the company and shareholders are likely to receive no value for their shares in Flybe.”

Based in Exeter, Flybe carries about eight million passengers a year from airports such as Southampton, Cardiff and Aberdeen, to the UK and Europe.

It put itself up for sale last November, following a profits warning the previous month.

Flybe said it had been “hampered by the challenging market environment”.

“Ongoing fuel and currency impacts presented particularly significant headwinds for Flybe as did the rapid and significant tightening on Flybe’s liquidity from the card acquirer market.”

In addition, it said, the “general economic outlook and conditions had impacted the business leading to a further weakening in consumer demand, affecting cash, revenues and profit adversely”.

It agreed to sell the parent company to Connect on 11 January.

However, on 15 January, to avoid the airline going into administration the Flybe board entered into a separate agreement to sell the operating subsidiaries – the airline and the website – to Connect Airways for £2.8m.

That sale is expected to be competed by 22 February, and does not require shareholder approval.

Once it is complete, however, the parent company will not have any subsidiaries or assets other than cash from the sale of the operating assets. The directors said it was not anticipated that after meeting costs there will be “any remaining funds available for distribution to Flybe shareholders”.

The directors said as a result if the shareholders did not approve the initial sale of the parent company, they would wind up the business.

Therefore, the directors said they “strongly” advised Flybe shareholders to vote in favour of the sale of the parent company in order to receive any money at all.