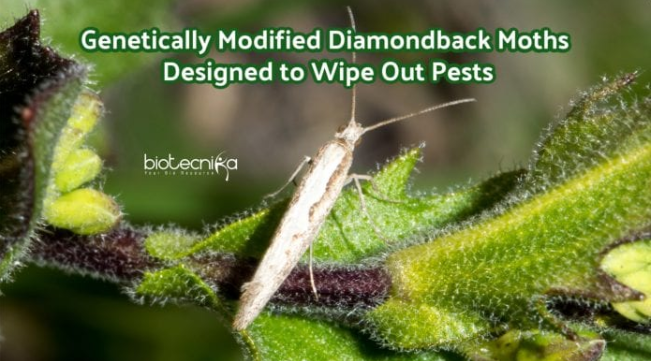 For the first time in New York State, genetically engineered moths, genetically modified diamondback moths were released into the wild to wipe out wild pest populations.

Diamondback moths are pests that come under migratory pests. These moths are found in Southeast Asia, New Zealand, Europe, and America, especially in areas where all-year-round crops can be grown. In these parts, where it is not too cold nor too hot, is where diamondback moths can cause huge problems like causing billions of dollars in damages to cruciferous crops such as canola, cauliflower, broccoli, and cabbage. Because of their high resistance capacity to most insecticides and high reproduction rates, these moths are one of the most dangerous insects.

Researchers in efforts to address these problems in an environmentally friendly and sustainable way, they have successfully engineered genetically modified or genetically engineered (GE) male diamondback moths for controlling the pest population of their wild counterparts.

At the Cornell University’s College of Agriculture and Life Sciences, the lead author of the study and entomology professor, Anthony Shelton said, “Controlling medically important diseases using genetically engineered insects has a lot of interest. Though, in agriculture, for controlling major pest species, I think we can take advantage of the genetically engineered insects.”

A self-limiting strain of moths

Oxitec, a developer of insect biological control systems that is known for its modified mosquito releases to reduce mosquitoes that carry dengue fever or malaria, is the one who engineered these moths.

Developers incorporated a self-limiting gene while rearing the moths and this gene would make female offspring die shortly after hatching.

An antibiotic, tetracycline is included in the moth’s diet. This is used to suppress the gene, so that female moth can be produced too.

Shelton said, “You do not include tetracycline when you want to release populations of males. Feeding on the artificial diet, all the female larvae will die. After which, there will be thousands and thousands of males which can be released in the field.”

The moths were marked with different fluorescent powders and released together in the cabbage field studies in Geneva, New York and then were captured in a trap. In regard to factors that would determine their potential to suppress pests, the GE moths behaved similarly to their wild counterparts.

Just as much as their wild counterparts did, these GE moths also traveled the same distance and survived the same duration, in a ratio of two modified insects to one wild type. Shelton said that in previous programs the ratio was much higher and that this ratio is remarkable.

Also, the GE moths competed equally for female mates with the wild moths. However, when the GE moths mates with the wild female moth, they will not produce viable offspring because of the self-limiting gene preventing the offsprings from surviving, which lead the authors to conclude that with the ongoing releases, without using insecticides, pests can be suppressed in a targeted and sustainable way.

The authors said that eventually, the GE moths will have no one to mate with which would lead them to decline and within a few generations, they would be disappeared. To suppress the wild populations, more releases are needed.

An entomology professor at the University of Georgia’s College of Agriculture, Alton Sparks said, “This method has a huge potential impact on the growers and producers of those crops as this is a method that would reduce the number of pests and insecticides needed to eradicate them. For 32 years, I’ve been battling diamondback moths on cold crops in Georgia and in South Texas. My job would become a lot easier for this one specific group of crops if this works and can be implemented.”

As it is only been used on a few insects, the practice is not that common even though the field releases have been successful.

The US Food and Drug Administration and the Bill & Melinda Gates Foundation have funded programs that are geared towards fighting diseases and illnesses including malaria, zika virus and dengue fever using modifying insects.

The FDA cleared a modified mosquito developed by Oxitec in 2016 for a field trial in Floria in 2016 as there was no negative effect on human health or the environment found.

There have been quite some programs that have been successful: The overall population of mosquitoes was reduced to 90% by roughly 450,000 modified male mosquitoes released by Oxitec from 2013 to 2015.

However, there are still many controversies in regard to modified insects and many experts agree that to determine the long term effects of genetically engineered insects and to know if manipulating genes upsets natural ecological studies, more studies are needed.

Why Some Cancers Become Resistant to CAR-T Immunotherapy

Research Roundup: Eating an Egg a Day is Healthy and More