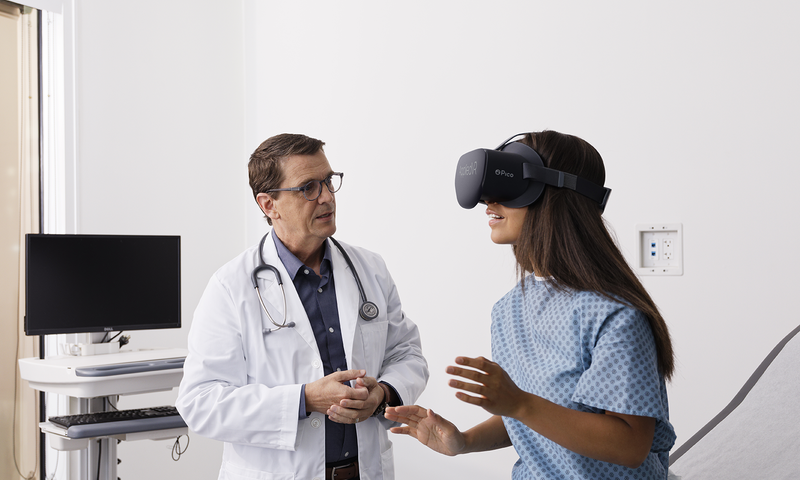 In a first for the FDA, the agency approved a virtual reality device to treat lower back pain, offering up an opioid-free alternative to many current pain management regimens.

The newly approved EaseVRx device comes from AppliedVR. It uses cognitive behavioral therapy and other therapeutic techniques to guide patients through games, lessons and exercises to reduce their chronic back pain. The immersive software is loaded onto a VR headset and used by patients in solo, at-home sessions every day for eight weeks, with sessions ranging from two to 16 minutes in length.

With the FDA’s de novo clearance, AppliedVR can now begin marketing the device across the U.S. It’s indicated for prescription use only by patients aged 18 and older who have been diagnosed with moderate to severe back pain lasting longer than three months.

EaseVRx’s therapeutic offerings include pain education and games to improve executive functions like memory and self-control along with breathing, mindfulness and relaxation-response exercises. The VR content helps patients develop not only coping skills but also new habits to reduce the intensity and interference of their chronic pain.

The FDA approval was backed by two clinical trials, both of which ultimately proved EaseVRx was both scalable and effective as a pain treatment. The first followed about 100 patients for 21 days and compared the VR system to an audio-only program. After the trial period, the patients in the VR group reported significantly higher reductions in their pain intensity and interference, as well as improvements in sleep, mood and stress.

The second, placebo-controlled trial, meanwhile, put 179 patients through the full, eight-week program. Once again, the VR program outperformed the placebo, with improvements of at least 40% each in pain, mood, stress and sleep. Additionally, patients who used EaseVRx reduced their use of over-the-counter analgesics throughout the treatment period—while those in the placebo group did not—and also reported higher user satisfaction ratings for the VR device.

“We worked tirelessly over the past few years to build an unmatched body of clinical evidence that demonstrates the power of VR for the treatment of pain and couldn’t be more thrilled to achieve this important milestone,” said Josh Sackman, co-founder and president of AppliedVR. “But our mission does not stop with this one approval. We’re committed to continuing research that validates our efficacy and cost-effectiveness for treating chronic pain and other indications.”

To that end, the Los Angeles-based company will now broaden its focus, applying its VR to treat other forms of acute and chronic pain and proving its efficacy as an opioid-free alternative.

Those efforts will be backed by AppliedVR’s recent series B funding round, which the company announced just last week. The $36 million financing came courtesy of F-Prime Capital, JAZZ Venture Partners, Sway Ventures and SVB Ventures and doubled the company’s lifetime funding for a total of $71 million.