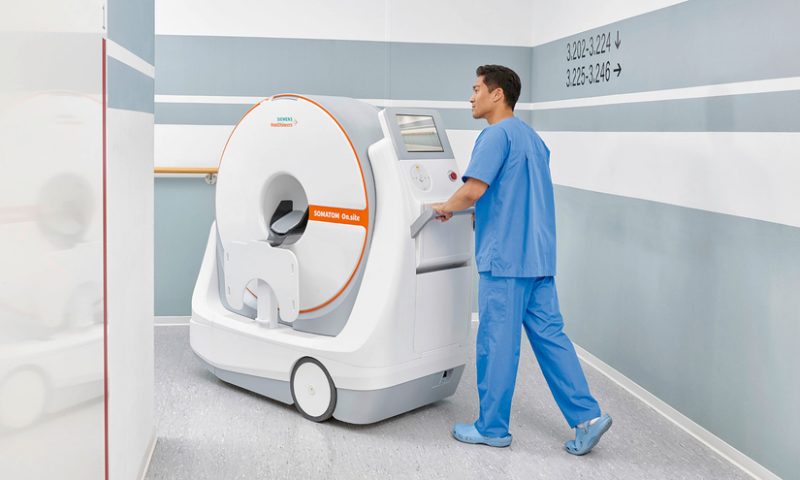 Siemens Healthineers has secured an FDA clearance for its wheeled CT scanner, designed to be brought to the patient instead of the other way around.

Placed at a person’s bedside, the Somatom On.site allows for easier head exams of critically ill patients, including those within intensive care units. This eliminates the risks and logistics of transporting the patient through the hospital to a radiology unit to use a larger machine.

With an all-in-one design, the scanner includes the necessary computers and batteries, as well as a touchscreen and keyboard for operation inside smaller rooms without extra equipment. After the system is locked in place at the end of a patient’s bed, the scanner moves on a telescopic gantry to acquire the image, with the person’s head resting within a 35 cm bore.

In addition, radiation curtain shields can be attached to the front and rear, allowing clinicians to stay nearby during scanning, while the patient can remain connected to any monitors and devices.

“The Somatom On.site is a fundamentally new approach for CT head scans of intensive care patients,” Siemens head of computed tomography, Philipp Fischer, said late last year after the device debuted at the December 2019 assembly of the Radiological Society of North America.

“At the same time, it allows healthcare providers to use their staff and their permanently installed CT fleet even more effectively,” Fischer said, with ICU patients typically requiring more time to be safely moved through a radiology suite compared to more conventional exams.

The Somatom scanner also features a built-in maneuvering camera, which shows the technologist where they’re going, and lets one person navigate the device through hospital hallways using motorized wheels.