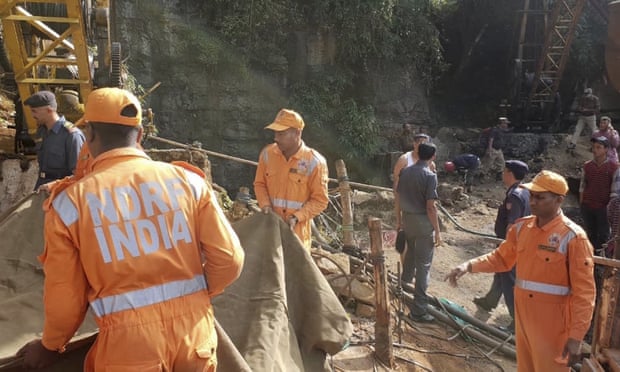 Indian rescue workers have renewed their efforts to reach 15 coal miners trapped underground for 13 days as families prayed for their safe return.

But hopes of finding them alive looked slim on Wednesday after floodwaters rushed through the illegal “rat-hole” pit.

The group went to work in the mine in the north-eastern state of Meghalaya on 13 December and have been underground ever since.

“Only God’s grace and some miracle can help them to be alive,” Kyrmen Shylla, Meghalaya’s disaster management minister, told Reuters by telephone from the state capital Shillong.

The operation to rescue the miners from the 100m-deep shaft in Ksan was suspended on Sunday following flash floods from a nearby river, officials said.

A team of about 100 national disaster response force (NDRF) experts have been camping at the mine site but their operations have been hampered by lack of sophisticated equipment, SK Shastri, NDRF commandant leading the operations, said.

“The water level hasn’t gone down an inch – it increased after it rained,” Shastri said. “The two 25-horsepower pumps were ineffective. We need up to 12 100-horsepower pumps to drain out water.”

Mining was banned in the mineral-rich state by a federal court in 2014 after local communities said it was polluting water bodies.

But the practice continues with locals illegally extracting coal using dangerous “rat hole” mines. This involves digging into the side of hills and then burrowing horizontal tunnels to reach a coal seam.

Workers, including children, descend hundreds of feet on bamboo ladders to dig out the coal, often leading to accidents at such mines.

At least 15 miners were killed after they were trapped in another flooded rat-hole mine in Meghalaya in 2012. Their bodies were never recovered.

American Becomes First to Travel Across Antarctica Alone and Unaided