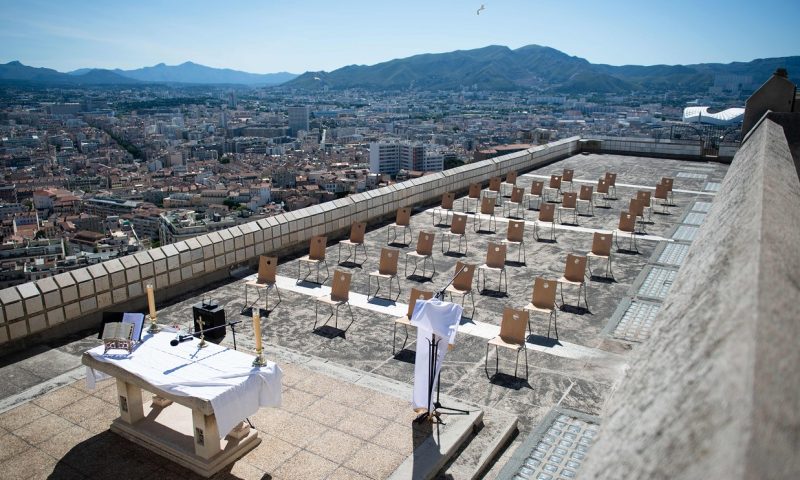 European stocks rose to kick off the week on Monday, with investors inspired by countries reopening from pandemic shutdowns, and an upbeat business sentiment survey out of Germany.

But trade was thinner trade given holidays in the U.K. and the U.S.

The German DAX DAX, 1.94% jumped 1.6% after German business sentiment came in stronger than expected for May after a “catastrophic few months,” said the Ifo institute. The gradual easing of the lockdown “offers a glimmer of hope” for business, said Clemens Fuest, Ifo president.

Ahead of that data confirmed a 2.2% slowdown in German first-quarter growth, marking the biggest decline since the financial crisis and pushing the economy into a recession. It was followed Later in the morning, German business sentiment rose in May, beating forecasts as business expectations improved considerably, the Ifo Institute said Monday.

Investors are keeping an eye on mounting tensions between the U.S. and China and rising Hong Kong unrest, but remain “somewhat optimistic regarding the reopening of businesses across the globe and hope for more monetary and fiscal stimulus,” said Ipek Ozkardeskaya, senior analyst at Swissquote Bank, in a note to clients.

Hong Kong police fired water cannons and tear gas at protesters in a popular shopping district on Sunday, as thousands mounted street protests against China’s plan to move to push for national security legislation on the city. Signs of fresh tensions in the region are adding to frictions that have been building between the U.S. and China over the coronavirus pandemic.

House national security adviser Robert O’Brien said Sunday that the U.S. will likely sanction China if that legislation goes through. For its part, China has cautioned over strained relations between the two countries.

“We need to be alert to efforts by some political forces in America to hijack China-US relations and who try to push the two countries toward a so-called ‘new Cold War’,” said China’s foreign minister Wang Yi in comments on Sunday, according to reports in the South China Morning Post and elsewhere.

In Europe, investors were cheered by news that major European countries are slowly reopening from shutdowns. Churches in France reopened for Sunday Mass for the first time in two months, while Spain said it would reopen for international tourists from July and Germany and Italy are also slowly reopening its economy.

In the U.K., Prime Minister Boris Johnson has come under fire for standing by chief aide Dominic Cummings, who drove 250 miles from London to Durham to his parents house while infected with coronavirus.

Drug stocks were on the move Monday, with shares of heavily-weighed Bayer AG BAYN, 7.76% gaining 4.5% after Bloomberg reported the company has reached deals with 50,000 to 85,000 U.S. cancer lawsuits connected to its weedkiller Roundup. Those sources cited said none of the deals have been signed yet.

Nikkei rises, but Hong Kong shares slip as tensions with China heat up