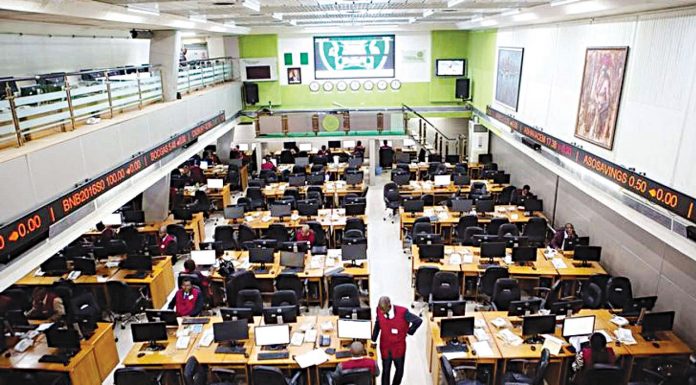 The equities market fell to a 52-week low last week as the bears consolidated their hold on the market. The persisted selloffs in bellwether counters led to a decline of 2.3 per cent in the Nigerian Stock Exchange All-Share Index (NSE ASI) to close at 34,037.91. Market capitalisation shed N295.9 billion to close at N12.4 trillion.

Bears dominated the market four out of the five trading days. The only gain in the week was on Tuesday when the market fell 0.03 per cent.

Market analysts said the downtrend remains largely driven by the lingering uncertainties around the 2019 general elections which they said they expect to be sustained.

“Nevertheless, we maintain that the current trend is not necessarily a true reflection of the fundamentals of companies and we believe that opportunities still remain in the market. Consequently, despite the overall negative performance, there were periods of intraday gains during the week,” they said.

All the sectors closed in the negative led by the NSE Oil& Gas Index that went down by 3.7 per cent, followed by the NSE Consumer Goods Index with 2.7 per cent depreciation.

Similarly, the NSE Banking Index, NSE Industrial Goods Index and NSE Insurance Index dipped by 2.4 per cent and 1.9 per cent and 0.1 per cent respectively.

Our outlook for equities in the near-to-medium term is negative, owing to the absence of a near term positive catalyst and lingering jitters across the global space. However, macroeconomic fundamentals remain stable and supportive of recovery in the long term.

The market opened Monday, which was also the first day of September on negative note as the index shed 0.03 per cent. The market had closed the month of August with a decline of 5.9 per cent and some level of bargain hunting was being expected last week due to the low prices of many stocks. However, that was yet to materialise as stocks continued to plummet.

Some other analysts had guided investors to trade cautiously in the short-to-medium term, saying the absence of a positive one-off catalyst and brewing political concerns, continue to cast a shadow on their outlook for risky assets.

A total of 19 stocks depreciated on Monday while 18 appreciated. Jaiz Bank Plc led the price losers with 10 per cent, trailed by Flour Mills of Nigeria Plc with 9.6 per cent, while Transcorp Plc went down by 7.9 per cent. Prestige Assurance Plc, Veritas Kapital Insurance Plc and Mutual Benefits Assurance Plc dipped by 7.6, 6.9 per cent and 6.6 per cent in that order.

The market rebounded on Tuesday as the NSE ASI rose 0.28 per cent to close at 34,933.68 while market capitalisation added N36.1 billion to close at N12.8 trillion. Buying interest in banking stocks such as Zenith Bank Plc, GTBank Plc, United Bank for Africa Plc buoyed the return of the bulls. However, 23 stocks appreciated compared with 18 that lost value.

AIICO Insurance Plc led the price gainers with 10 per cent, trailed by Jaiz Bank Plc and C & I Leasing Plc with 8.8 per cent apiece. Diamond Bank Plc appreciated by 8.7 per cent, just as Japual Oil & Maritime Services Plc and WAPIC Insurance Plc chalked up 8.3 per cent,7.6 per cent respectively.

The shares of Guinness Nigeria depreciated despite the company’s improved results for the year ended June 30, 2018. The audited results of the brewing firm showed a revenue of N125.9 billion, up by 14 per cent from N125.92 billion in 2017. Net financing expenses fell 54 per cent to N3.443 billion, from N7.527 billion following a rights issue of last year.

Commenting on the results, Managing Director/CEO, Guinness Nigeria Plc, Baker Magunda, said: “Improved operating performance combined with lower finance charges have helped us deliver an overall PAT increase of 249 per cent during year. The execution of our strategy is working as we delivered both top line growth and margin expansion while also increasing investment behind our brands. Looking forward, we will continue to focus on the three strategic pillars of productivity, expansion of our portfolio, as well as the execution of the commercial footprint initiatives to drive the business forward. Whilst we remain optimistic about the execution of our strategy, we note that the operating and competitive environment is likely to continue to be challenging in the 2019 financial year.”

The gain recorded on Tuesday could not be sustained on Wednesday as the bears resurfaced pushing the year-to-date (YtD) decline to 10 per cent. The NSE ASI ended the day lower at 34,414.37, while market capitalisation shed N190.5 billion to close at N12.6 trillion.

Profit booking by investors profit in bellwether counters such as Dangote Cement Plc, Zenith Bank Plc, Guaranty Trust Bank Plc and Seplat Petroleum Development Company Plc led to the negative performance. In all, 26 stocks lost value as against 20 that appreciated. Mutual Benefits Assurance Plc, which is shopping for N2 billion via Rights Issue, led the price losers with 10 per cent. It was followed by Learn Africa Plc with 9.8 per cent, just as Chams Plc and Law Union & Rock Insurance Plc fell by 9.6 per cent and 9.5 per cent in that order.

On the other hand, C& I Leasing Plc led the price gainers with 8.5 per cent trailed by Jaiz Bank Plc with 8.1 per cent. Sterling Bank Plc and Forte Oil Plc garnered 5.8 per cent and 5.2 per cent in that order.

In terms of sectoral performance four of the five tracked sectors closed in the bears’ territory. Only the NSE Consumer Goods Index emerged gainer with 0.3 per cent.

The stock market depreciated further on Thursday as investors continued with sell pressure. As a result, NSE ASI fell 0.88 per cent to close at 34,110.22, while market capitalisation ended lower at N12.45 trillion. The negative performance was partly due to intense sell pressure in banking and consumer goods large-cap counters. Specifically, some of the leading price losers were GTBank Plc, Stanbic IBTC Holdings Plc, United Bank for Africa Plc, Nigerian Breweries Plc and Zenith Bank Plc.

Stanbic IBTC Holdings shed 4.2 per cent on a day its banking subsidiary, Stanbic IBTC Bank reported to the NSE that the Central Bank of Nigeria (CBN) had deducted the sum of N1.886 billion from its account. The N1.886 billion is the fine the apex bank imposed on Stanbic IBTC Bank, along with three other banks for illegally assisting MTN Communications Nigeria to repatriate $8.134 billion between 2007 and 2015.

However, in a letter dated 06 September, 2018 to NSE, Stanbic IBTC Bank, reiterated its position that it has not breached any extant laws relating to Certificates of Capital Importation (CCI) executed on behalf of MTN.

“Stanbic IBTC Holdings PLC as well as our banking subsidiary maintain our position on this matter, which is the fact that the Bank has done nothing illegal and accordingly the Bank will continue to provide CBN with documents and details in support of our contention that our actions in relation to these transactions were not illegal,” the bank said, reassuring stakeholders that the current situation would not affect the seamless transactions with the bank.

Despite, the foregoing the shares of Stanbic IBTC Holdings Plc closed as the eight highest price loser, falling from N47.00 to N45.00 per share.

On the positive side, A.G Leventis Nigeria Plc led the price gainers with 10 per cent, trailed by Fidson Healthcare Plc with 9.0 per cent. Sovereign Trust Insurance Plc chalked up 8.7 per cent, just as Royal Exchange Plc added 8.3 per cent. Continental Reinsurance Plc and LASACO Assurance Plc garnered 6.6 per cent and 6.4 per cent order.

The market went down 0.21 per cent on Friday, which was the last day of the week following the depreciation recorded in the share prices of Dangote Cement, Zenith Bank, Lafarge Africa, Transcorp, and Oando Plc among others.

Meanwhile, investors traded 892.725 million shares worth N13.075 billion in 15,607 deals last week, down from 1.533 billion shares valued at N23.026 billion that exchanged hands in 17,009 deals the previous week. The Financial Services Industry remained the most active recording 757.992 million shares valued at N9.251 billion traded in 9,653 deals, thus contributing 84.9 per cent and 70.7 per cent to the total equity turnover volume and value respectively. The Consumer Goods Industry followed with 43.651 million shares worth N2.754 billion in 2,231 deals, while the third place was occupied by Oil and

Trading in the top three equities namely – UBA, GTBank and Stanbic IBTC Bank Plc accounted for 257.188 million shares worth N6.996 billion in 2,270 deals, contributing 28.8 per cent and 53.5 per cent to the total equity turnover volume and value respectively.

Also traded during the week were a total of 1.248 units of Exchange Traded Products (ETPs) valued at N197,421.45 executed in three deals, compared with a total of 2,422 units valued at N3.752 million that was transacted two weeks ago in 15 deals.