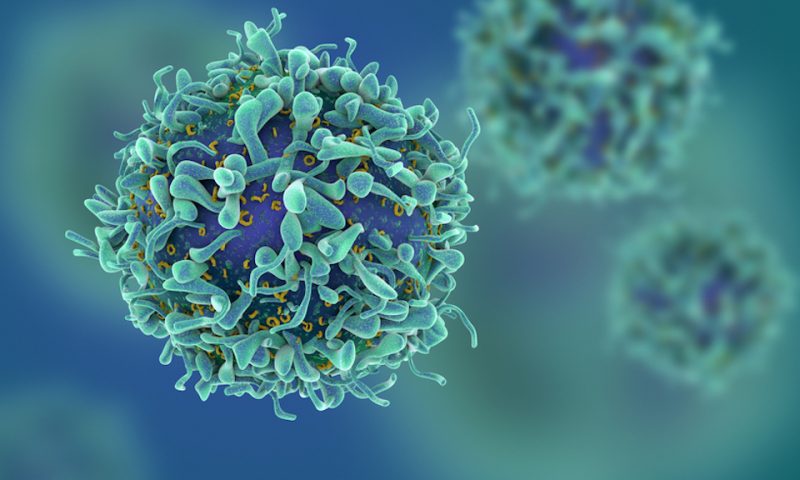 CAR-T therapy modifies a patient’s own T cells so they can better identify and attack cancer cells. But more details are needed on the intricate mechanisms behind the cells’ cancer-killing effects.

By studying a lymphoma mouse model with the full immune system, scientists at France’s Institut Pasteur have shed light on the different roles of CAR-T cell subsets as well as their communication with host immune systems in killing cancer cells.

They showed the interaction between inflammatory molecules interferon gamma (IFN-gamma) produced by CAR-T cells and interleukin 12 (IL-12) by host cells is essential to the cancer-killing activity of CAR-T cells, according to a study published in the journal Science Immunology. The findings pointed to enhancing that interplay as a strategy to prevent CAR-T treatment relapses in blood cancer or even help extend the therapy’s use to solid tumors, they said.

The researchers showed CAR8 T cells played a dominant role in the direct killing of tumor cells, which is dependent on contact between the T cells and cancer cells. By contrast, CAR4 T cells seemed to be more involved in indirect killing of cancer cells, as the researchers didn’t observe much direct interaction between them. Of the two, the CAR8 T cells showed higher killing ability, which underscored their importance for the initial tumor regression, the scientists suggested.

The team then set out to understand how the animals’ immune system and the tumor microenvironment respond to the presence of CAR-T cells.

Both CAR4 and CAR8 T cells substantially modified the tumor microenvironment, the team showed. The treatments boosted the recruitment of cytotoxic effector cells such as natural killer cells and increased the expression of genes related to antigen presentation at the tumor site. During this process, it was CAR4 T cells that turned out to be more efficient at mobilizing the host immune system, the team found.

IFN-gamma didn’t seem to work by itself, as even normal CAR8 T cells were unable to control tumor growth when the host was incapable of sensing IFN-gamma. The scientists pinpointed IL-12 as IFN-gamma’s collaborator in sustaining cancer killing by CAR-T cells. IL-12 is known to boost cytotoxic responses in conventional CD8+ T cells. In the current study, the team showed that without host IL-12 production, CAR8 T cells displayed reduced ability to either direct kill cancer cells or boost cytotoxic effectors.

CAR-T therapy offers a powerful new weapon in cancer treatment, but still less than 50% of lymphoma patients treated with it will enjoy a durable response beyond six months. So, many research groups have looked for ways to improve its efficacy.

Based on its new findings, the Institut Pasteur team suggested invigorating the communication between CAR-T cells and host cells mediated by IFN-gamma and IL-12 could be an attractive strategy to enhance CAR-T treatment.

Relapse due to the emergence of antigen-negative tumors marks a major hurdle for CAR-T cell therapy, suggesting new methods aimed at boosting host immunity are needed to reach durable response. “Exploiting the molecular and cellular players identified in CAR-T cell interactions with the TME therefore represents an attractive opportunity for combination therapies aimed at preventing relapses,” the researchers wrote in the study.