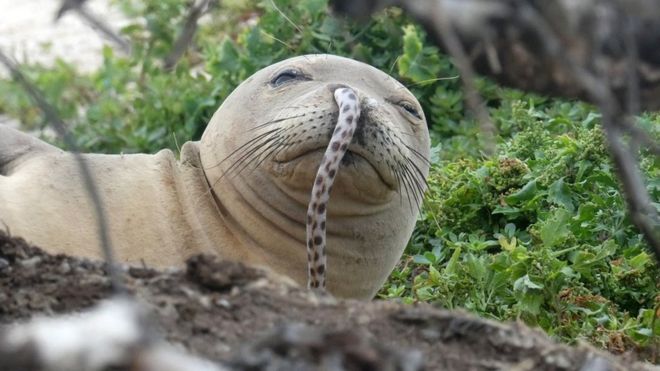 The spectacle of a spotted eel stuck in an endangered Hawaiian monk seal’s nose has left researchers scratching their heads.

A photo of a juvenile seal in the slippery predicament was shared this week by the US National Ocean and Atmospheric Administration (Noaa).

Despite monitoring the species for nearly 40 years, they have only seen this phenomenon a few times since 2016.

All the seals were caught and freed after the eels were gently removed.

When Hawaiian monk seals forage by sticking their mouth and nose into crevasses of coral reefs, under rocks or into the sand, a trapped eel may have found itself stuck while trying to defend itself or escape.

Alternatively, the stuck eel could be the result of the seal, which often throws up food, regurgitating its food the wrong way.

The truth will remain a mystery, but in the meantime Noaa has now developed guidelines for removing eels in future incidents.