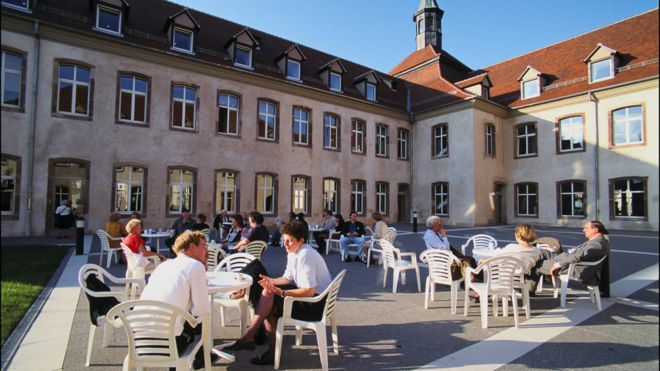 For France’s intellectual crème de la crème a place at the elite Ecole Nationale d’Administration (ENA) is coveted above all others.

Many try repeatedly to pass ENA’s notoriously tough entrance exams, so desperate are they to get in.

But the Strasbourg school’s most powerful ex-pupil is reportedly turning against it.

Determined to quell the gilets jaunes (“yellow vest”) protest movement, President Emmanuel Macron has proposed abolishing ENA, according to the text of an upcoming speech leaked to French media.

“If we want to build a society of equal opportunity and national excellence, we must reset the rules for recruitment, careers and access to the upper echelons of the civil service,” he is quoted as saying.

“That’s why we will change the system of training, selection and career development by suppressing ENA and several other institutions.”

The president’s office has declined to comment on the leaked text.

French media say it was to be in his address to the nation marking the conclusion of a two-month great debate. But the speech was postponed because of the Notre-Dame fire.

It was established in 1945 by then French President Charles de Gaulle, in the immediate aftermath of World War Two.

It was created “with a spirit of reconstructing France and renovating the state”, said anthropologist Irène Bellier of France’s National Centre for Scientific Research.

“The ideology was you’d raise a group of people capable of acting in the public interest.”

Prior to its creation, each ministry had its own hiring process and standards, resulting in closed networks that almost exclusively favoured the upper class.

But while designed as a meritocracy, research shows that ENA students’ parents are often senior civil servants themselves or CEOs. Very few come from working-class backgrounds.

“It’s the school of the elite,” Mr Eymeri-Douzans said.

Who attends the school?

They tend to be in their mid- to late-20s, with previous qualifications from other higher-education institutes, including other elite French “grandes ecoles”.

Some students enter ENA as postgraduates, while others come from lower-level civil service jobs or from other professions.

According to experts, less than a third of its intake are women.

“So many ministers, presidents, prime ministers of France are graduates. Many of the CEOs of major French companies are also alumni, even though it wasn’t meant for that,” said Mr Eymeri-Douzans.

He stressed that wealth is not the defining trope of ENA students.

“The problem is culture… It is a small world of bourgeois families. If you are new money, full of money but with no culture, no education, you won’t be there.”

So how do you get in?

Hundreds apply each year, but only around 10% make the final cut, according to Mr Eymeri-Douzans.

The three-part admissions system has both written and oral components that test candidates on their knowledge of issues including economy, law and international relations.

The most dreaded of the exams is the “grand oral”- a test in front of a jury, in which candidates are asked to talk about a particular topic, which could be anything from technology or politics to a genre of film.

“That is one of the most intense moments of this process… They have to acquire a lot of knowledge, a lot, a lot, a lot,” said Ms Bellier.

“You need to show yourself, it’s kind of performing, but they are not actors. The tension is very high.”

People often train for years for the exams.

Those who make it through the exams split their time between training and internships.

At the end of the course, they are given a ranking which dictates which jobs they are able to apply for.

Those with top marks can look at coveted positions in France’s Council of State, Financial Inspectorate and Court of Auditors, while the less outstanding students enter less prestigious civil service jobs.

While some say the rigorous training system puts the most qualified people in positions of power, others say it is an archaic institution that keeps ordinary people out of power.

For now, its fate rests in the hands of its former pupil.

Agent Orange: US to clean up toxic Vietnam War air base

Ukraine election: Voters to choose between comic and tycoon