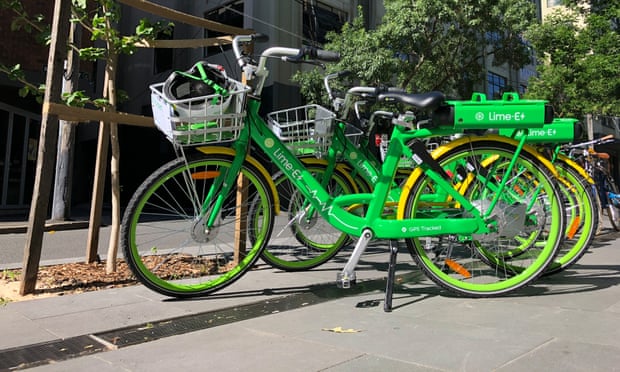 The Uber-backed electric scooter and bike-sharing company Lime has launched its first UK operation with dockless e-bikes in Milton Keynes.

The Californian transportation company, which launched in early 2017 but is already valued at $1.1bn (£860m), has spread rapidly across the US and parts of Europe.

The bikes, which can be located and unlocked via the Lime phone app, will cost £1 to unlock and 15p a minute to ride – a 28% higher charge than that paid by American users while the pound sustains its value, and significantly higher than other e-bike sharing schemes that have launched in the UK.

However, Lime claims the scheme will be first fully dockless e-bike business in the UK. Dockless bikes have not fared well in the UK so far, with Mobike withdrawing from Manchester after a high rate of thefts and vandalism. Reports of missing and abandoned e-bikes quickly surfaced in Derby, which launched a sharing scheme this summer.

Lime will start with 50 bikes in Milton Keynes and double that number as demand grows. It is understood to be in talks to launch in another UK city by Christmas.

Lime’s most distinctive green vehicle is its electric scooter, which launched in Paris earlier this year, but e-scooter sharing has been ruled out for now by Department for Transport regulations in the UK.

Despite the backing of Uber and Google, who invested as part of a $335m fundraising round in July, Lime has fallen foul of the authorities in its native San Francisco, where the city banned the scooters before licensing a rival company to run a similar scheme.

Safety questions have also been raised, with the death of a Lime scooter rider at the weekend the third reported fatality in the US in the past three months.

While Lime still hopes it can introduce e-scooters to Britain in some capacity in the future, for now, its e-bikes will spearhead its move into the UK. The bikes will have a maximum speed of just under 15mph.

Lime expects the average trip to be about 15 minutes, costing £3.25, and it will employ local operations teams to maintain the e-bikes and redistribute them around the city after hires.

Jaanaki Momaya, Lime’s UK general manager, said the scheme would be “an emission-free, affordable, accessible and convenient way of getting around town”.

She said Milton Keynes, which is home to future mobility companies and has seen trials of driverless vehicles on its streets, was at the forefront of transport innovation. “We could not think of a better place to launch in the UK and we look forward to expanding into other areas shortly,” Momaya added.