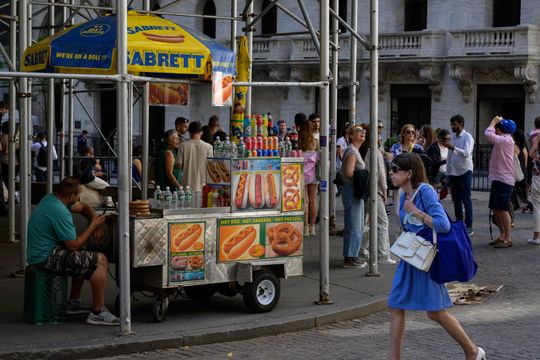 Inflation will remain high through 2024 because of ‘unprecedented growth’ in money supply since the pandemic, says economist Steve Hanke

Financial markets investors worry the U.S. is on the brink of an economic downturn as central bankers in Jackson Hole reaffirmed their determination to raise interest rates to bring inflation under control.

Steve Hanke, a professor of applied economics at Johns Hopkins University, said that he believes the U.S. is heading for a “whopper” of a recession next year, but it’s not necessarily because of higher benchmark interest rates.

“We will have a recession because we’ve had five months of zero M2 growth–money supply growth, and the Fed isn’t even looking at it,” Hanke said in an interview with CNBC on Monday. “We’re going to have one whopper of a recession in 2023.”

M2 is a measure of the money supply that includes cash, checking and saving deposits, and shares in retail money mutual funds. Widely used as an indicator of the amount of currency in circulation, the M2 measure has stagnated since February 2022, following “an unprecedented growth of money supply” starting with the COVID-19 pandemic in February 2020. (See chart below)

“There had never been sustained inflation in world history – that is inflation above 4% for about two years – that had not been the result of unprecedented growth of money supply, which we had starting with COVID in February of 2020,” Hanke said. “That is why we’re having inflation now, and that’s why, by the way, we will continue to have inflation through 2023 going into probably 2024.”

U.S. inflation eased in July with the Consumer Price Index increasing 8.5% from a year earlier, down from a 41-year high of 9.1% in June, raising hopes that a surge in price level may have peaked.

However, Chair Powell reaffirmed in his Jackson Hole speech last Friday that the central bank still plans to continue raising interest rates to return inflation to their 2% target, even if it results in “some pain” for U.S. households and businesses.

“The problem we have is that the Chairman does not understand, even at this point, what the causes of inflation are and were,” Hanke said. “He’s still going on about supply-side glitches. He has failed to tell us that inflation is always caused by excess growth in the money supply, turning the printing presses on.”

Hanke is not the only one predicting a much deeper economic downturn that could last into 2024. Stephen Roach, former chairman of Morgan Stanley Asia and former Federal Reserve economist, warns the U.S. needs a “miracle” to avoid a recession.

“We’ll definitely have a recession as the lagged impacts of this major monetary tightening start to kick in,” Roach told CNBC on Monday. “They haven’t kicked in at all right now.”

Roach said Chairman Powell has no choice but to take a Paul Volcker approach to tightening. Volcker served as the 12th chair of the Federal Reserve from 1979 to 1987. During his tenure, Volcker aggressively hiked interest rates and successfully wrung inflation out of the economy, but at a great cost – tipping the economy into two consecutive recessions with stock market crashes and high unemployment.

“Go back to the type of pain Paul Volcker had to impose on the U.S. economy to ring out inflation. He had to take the unemployment rate above 10%,” said Roach.

However, markets await the August U.S. jobs report which is scheduled for release on Friday. Wall Street estimates the nonfarm payroll will show the economy adding 318,000 jobs in August. The unemployment rate is projected to stay flat at 3.5%, while the average hourly earnings are estimated to rise 0.4% following a 0.5% rise the previous month.