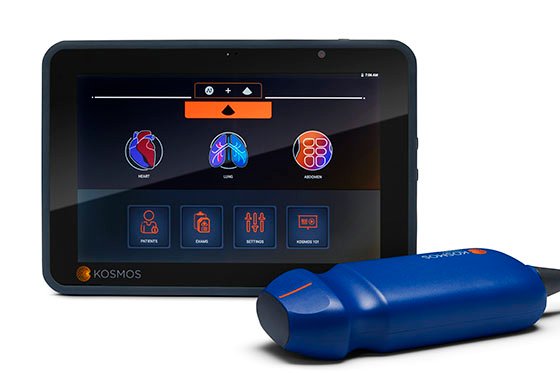 The namesake of EchoNous’ Kosmos system may be inherently unknowable, but the Washington-based company is hoping healthcare providers will soon become very familiar with its artificial-intelligence-powered ultrasound device.

After locking down 510(k) clearance from the FDA in March 2020, EchoNous is now on track to begin the commercial rollout of its Kosmos platform, backed by a recent influx of funding from Kennedy Lewis Investment Management.

The $60 million investment encompasses a combination of debt and equity financing and nearly doubles EchoNous’ lifetime funding. Before Kennedy Lewis came aboard, the company’s principal backer was KKR, which contributed two rounds of $35 million each in 2015 and 2017.

Not only is the Torso equipped with continuous-wave and pulsed-wave Doppler technology to perform ultrasound scans, it also features digital auscultation and an integrated electrocardiogram reader, allowing it to perform stethoscope and ECG readings as well as ultrasound imaging.

The data collected by the Torso are further analyzed by the Kosmos AI algorithms, which were trained on thousands of ultrasound clips annotated by experts. The AI is installed on a connected tablet—either a user’s own Android device with the Kosmos app downloaded or a preloaded tablet purchased from EchoNous.

The AI platform can automatically compute ejection fraction, stroke volume and cardiac output from heart readings in a matter of seconds. It also guides users through the scanning process, providing animated diagrams and automated grading and labeling to ensure they capture the highest-quality images possible.

In a case study conducted from April 2020 to February 2021, researchers used the Kosmos system to scan more than 1,200 patients and concluded that it provided comparable results to more expensive cart-based ultrasound systems. The company has said the device will be priced under $10,000.

Beyond the device’s ability to generate diagnostic-grade imaging data in nearly every instance, the researchers found physicians on clinical rounds and in the coronary care, COVID-19 and emergency departments quickly came to prefer the Kosmos system to traditional ultrasound carts due to its portability, easy cleaning and fast boot-up time, requiring an average of just 13 seconds to get started.

They also noted that the Torso’s added ECG abilities prevent patients in coronary care units from needing to be transferred to echo labs, saving time and money.

According to the company, those findings make Kosmos the only point-of-care AI-powered ultrasound system to produce diagnostic images at the same quality as larger and more expensive cart-based machines. It’s also the only device of its kind to offer continuous-wave Doppler technology and to provide HIPAA-compliant data transfers and storage.